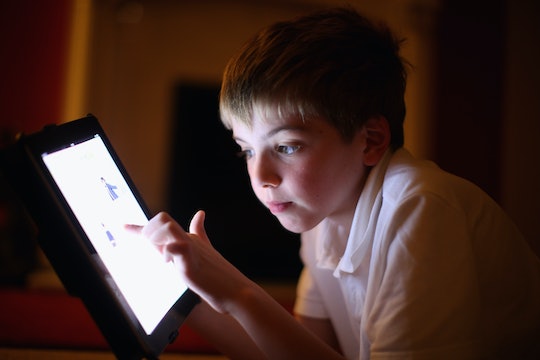 We've all been there — the grocery store line, or the car ride to the grocery store, or even while you're just trying to put away the groceries once you get home: Sometimes it's just easier to hand your kid your phone. You might think it's no big deal, allowing your child just a couple minutes of playing some games or messing around with the camera (and, in the grand scheme of things, it probably isn't). But, as a new report from Common Sense Media shows, those minutes add up. Not only that, but kids' mobile screen time has tripled in the last four years, according to the report.

Common Sense Media is a national non-profit committed to helping children, parents, and educators "thrive in a world of media and technology." Its latest report, "The Common Sense Census: Media Use by Kids Age Zero to Eight," found that in 2013, children ages 8 and under typically spent just 15 minutes a day looking at mobile screens from devices such as smartphones and tablets. In their 2017 report, that number has more than tripled to 48 minutes of mobile screen time per day for kids 8 and under. To put these numbers into even more of a perspective, kids younger than 8 only spent 5 minutes on mobile devices in 2011, meaning that mobile screen time has increased more than nine times in just the past six years.

In addition to the amount of time kids are spending with mobile screens, the report found that the number of children with access to smartphones and tablets has increased substantially. In 2011, only 1 percent of young children had their own tablet devices. Six years later, that number has skyrocketed to reveal an astonishing 48 percent of young children have their own tablets.

One of the most interesting parts of the kids' media use census was data surrounding socioeconomic status and mobile device usage among children. The regional and socioeconomic gap in internet access known as the digital divide has gone down from 50 to 22 percent since 2011. Currently, 96 percent of families with higher incomes have access to high speed internet compared to just 74 percent of lower income families. As more lower income families have become connected, their children's mobile usage has also shot up. ,Kids from lower income homes spend an additional 1 hour and 39 minutes more looking at mobile screens compared to kids from higher income households, according to the report.

In 2016, the American Academy of Pediatrics revised its recommendations on screen time among children: Children under 18 months should avoid screen use entirely, save for video chatting. For children ages 2 to 5, screen time should not only be limited to just one hour per day of quality programming, but parents should also co-view with their child.

The effects of screen time on kids has been and continued to be widely studied and documented. When I was a kid, I was warned that too much television would "rot my brain," but as scientists examine the ever-evolving landscape of technology and its use among young children, the effects are far more nuanced than mere "brain rot." Screen time can affect a child's brain development, which can cause a cascade of other developmental problems as they grow up. Screen time has also been linked to increased depression among teens.

But then again, screen time isn't all doom and gloom: As the digital divide becomes narrower, that means more kids are getting access to connectivity — and tablets can help level the playing field academically. Interaction with educational apps and games can help children who are struggling develop literacy and math skills.

In such a digitally-connected age, what's a parent to do? The "tablet as babysitter" trick is not just a reality, but sometimes a desperate necessity for parents. While the report doesn't offer concrete solutions for parents to limit screen time, it does encourage families, educators, and policy makers to think more intentionally about the ways in which children engage with mobile technology and media. That said, here are three quick tips to help parents limit screen time without having to pull the plug on tech entirely.

Listen To Podcasts With Your Child

Kids' podcasts are the new hotness. I personally am a big fan of WOW in the World and WBUR's Circle Round for my preschooler, and he loves them. Podcasts are great for car rides because it gets the screen out of your kid's hand and encourages them to listen, pay attention, and think in the abstract.

Get Interactive With Your Home Voice Assistant

According to a report from Consumer Intelligence Research Partners, it's estimated that more than 30 million voice assistants like Google Home and Amazon Alexa will be in U.S. households by the end of 2017. Google has partnered with Disney to bring kid-friendly apps and games to Google Home, while Amazon has an extensive library of Alexa skills just for kids, from spelling bees to "The Magic Door," a voice-activated choose-your-own adventure.

Use A Parental Control Device Or Service In Your Home

From Disney's Circle to Google's Family Link, there are a number of devices that can help you limit your child's screen time without having to be a nag about it — set time and content limits via the device or service, and voila! The tech takes care of it for you.

As the Common Sense Media report shows, mobile technology has changed how children spend their time, and how parents engage — or don't — with their children. Screen time and mobile devices needn't be demonized, and it's all a matter of families finding the right media and tech consumption balance that works for them.