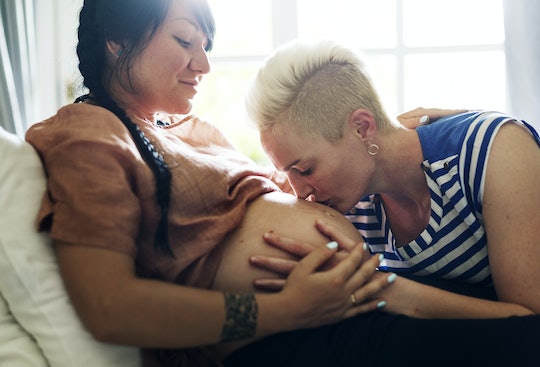 Kids Raised By Two Moms Turn Out Just Fine, According To A New Study

Any reasonable person would have assumed this, but just in case you need a little ammunition when debating an unreasonable person, here you go: kids raised by two moms turn out just fine, and now we've got the scientific data to prove it. Since 1986, the U.S. National Longitudinal Lesbian Family Study has been following and reporting on families with lesbian mothers and their children, who were conceived through donor insemination. The longest-running and largest prospective investigation of lesbian mothers and their children in the United States, the NLLFS tracks the kids' social, psychological, and emotional development in order to provide data for healthcare, education, public policy and more.

The data garnered from the NLLFS participants has shown, over the years, that children don't need to have a straight mother and father in order to become healthy, happy, productive members of society, something that should be obvious, but unfortunately, is still questioned by certain individuals regularly. In fact, just last week the House Appropriations Committee passed a bill containing an amendment that not only would allow adoption agencies to discriminate against LGBTQ parents, but would actually fine states that don't allow homophobic organizations to pick and choose which orientations are worthy of raising a child. So yeah, I guess we actually need the NLLFS.

You'd think that over 30 years of consistent data would be enough, but as the new report — published in the New England Journal of Medicine — noted, "the peak incidence of many psychiatric disorders occurs during emerging adulthood," and as the kids participating in the study are now young adults, it's the perfect time to check in with them once again. Of course, we'll probably still depend upon these generous souls to keep assuring us that they're fine until the day they die, lest some conservative lawmaker try to get some piece of anti-LGBTQ legislation passed based on the claim that kids with LGBTQ parents spontaneously combust at age 80 or something.

So here's the proof that they're still doing OK: 77 participants, who are now 25 years old, were asked to complete the standardized Achenbach Adult Self-Report, which is designed to measure adaptive functioning and behavioral or emotional problems among adults between the ages of 18 and 59. The results were then compared with those of a sampling of other U.S. subjects, while controlling for age, sex, race, ethnic background, and educational level. Here are the results:

A comparison of the NLLFS offspring sample and the matched Achenbach normative sample showed no significant between-group differences with respect to adaptive functioning (family, friends, spouse or partner relationships, and educational or job performance), behavioral or emotional problems, scores on mental health diagnostic scales, or the percentage of participants with a score in the borderline or clinical range.

No significant differences. Would you look at that.

And just in case you think this was a fluke, and maybe all the kids with emotional problems dropped out of the study before the latest data was gather, skewing the results (I'm just trying to account for every dumb argument, here), the NLLFS has a 92 percent retention rate, which is pretty damn impressive after three decades, if you ask me. And the kids have consistently tested as the same or better than kids with straight parents.

A 2005 report on interviews with 10-year-old NLLFS participants showed that their social and psychological development was comparable to their peers, and the prevalence of abuse in their homes was lower than the national average. Checking in on them at age 17 in 2010, the kids were "rated significantly higher in social, school/academic, and total competence and significantly lower in social problems, rule-breaking, aggressive, and externalizing problem behavior than their age-matched counterparts." Yet another analysis found that they were also "significantly older than their gender-matched peers" before they started having heterosexual sex, just in case your creepy uncle blames The Gays™ for teenage promiscuity or some such nonsense. They're fine. Maybe even better. Now, can we please just let them (and their moms) live?