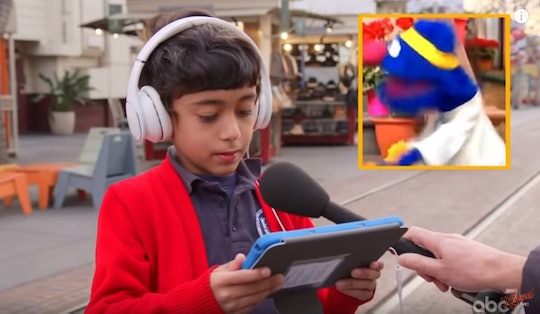 It's a debate nearly as old as "Laurel/Yanni." Did our sweet, sweet Grover, beloved muppet and notably inept waiter from Sesame Street, drop the f-bomb? At the end of 2018, a parent watching the show was caught off guard when they were certain they heard Grover exclaiming "That's a f***ing excellent idea!" Now, there were some people who were certain our sweet Grover would never say that and actually simply said, "That sounds like an excellent idea." Parents debated on social media... and now their kids are speaking out. Here's what kids think of the Grover f-word debate, because I sort of feel like they're the ones who are closest to the heart of the issue, you know?

More Like This
Attorneys General In Nearly Every State Oppose Facebook’s “Instagram For Kids” Plan
What Parents Should Know After A Mom Influencer’s Kidnapping Allegations Went Viral
12 Kid Guests Who Appeared On Ellen & Stole Our Hearts
Sorry Citizen Kane, Paddington 2 Is Now The Top-Rated Film On Rotten Tomatoes

So let's look at the original video first, shall we? The one initially shared in December by J.D. Durkin on Twitter of Grover having a friendly (and typically animated) chat with his pal Rosita about whether or not they should be moving a camera. Grover is in workout wear and totally agrees with Rosita's suggestion to move the camera. But does his agreement go a touch too far? Does he actually tell her that moving the camera is a "f***king excellent idea."

The debate raged on among adults on social media. But maybe we just have dirty minds once we become grown up and are beaten down by years of disappointment and bad language? Maybe children, the pure light in our world, would see something different?

Jimmy Kimmel decided to hit the streets for Jimmy Kimmel Live! to find out if the sweet little darlings heard anything like what we hardened adults might have heard.

As he explained in the video: "We wanted to find out if children heard anything off so we took a camera to the farmer's market and we showed it to kids and asked them to tell us what they heard."

At first, it looks as though the kids really don't hear anything but their sweet blue buddy being positive and supportive of his friend's idea. The first few kids who listened to the video were just smiling and repeating that Grover said, "I think that sounds like an excellent idea!" But then things took a turn.

One little girl is listening to the clip via headphones and you can see it in her face; she thinks she hears the f-bomb. When the producer asks her what she heard she says, giggling into her hand: "F-word. Don't worry I hear it at home."

From then on, most of the kids seem to hear the f-bomb and you can tell when they hear it by the look on their faces. Wide-eyed then a bit giggly.

I, personally, doubt Grover said the f-word. I mean, if he can get through all of those shifts as a waiter where that customer always complaining without swearing, I think he's probably golden.

But the fact that these kids hear it has me wondering if my world view is all wrong. Maybe everyone is always secretly swearing. Even muppets.