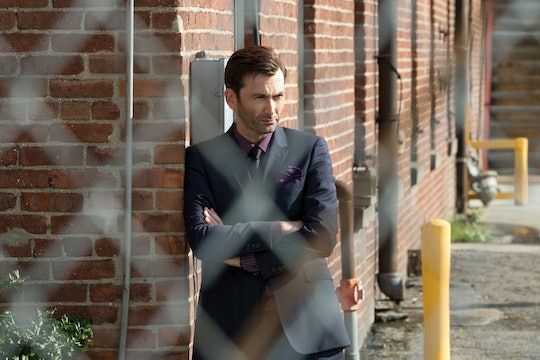 Warning: Season 2 spoilers ahead! Fans knew Kilgrave would be making an appearance at some point in Jessica Jones Season 2. They just didn't know how exactly the show would go about making it happen. But if you've made it all the way to Episode 11, you've finally seen it happen. And I have to say, it was worth the wait. Kilgrave's return on Jessica Jones was everything fans could hope for and more. Not to mention it was done in such a believable way.

Initially, I was concerned the show might try to explain a way for Kilgrave to still be alive, even though fans clearly saw Jessica break his neck in the Season 1 finale. That just wouldn't be believable, even by Marvel standards. No, this villain needed to remain dead. So how does his comeback take place, exactly? It all happened when Jessica accidentally killed her mother's evil security guard, Dale Holiday. She visited his place to dig up dirt on him since he had a very questionable past when it came to his inmates committing suicide. It turns out, he drove them to it and kept their prison ID numbers as souvenirs. Dale found Jessica in his place and attacked her, beating her to a pulp — that is until she managed to knock him over the head, probably harder than she meant to, making it fatal.

It didn't take long after that for Kilgrave to enter into her subconscious, manifesting himself as a symbol of her own inner guilt for taking another life.

That's right, Kilgrave's return didn't come in the form of a flashback or an actual physical form. He was a figment of her imagination — a hallucination reflecting the worst parts that she sees in herself. Because in her eyes, killing someone is something Kilgrave would be proud of, which only made her feel so much worse about it, regardless of how terrible the guy was.

Kilgrave's presence only lasted throughout the course of one episode, but it was just enough to reminder fans about what made him such a formidable villain. During the day following Dale's death, her former captor kept popping up, reminding her about what she did and that she would probably do it again at some point. He taunted her in the shower, on the sidewalk, basically anywhere she happened to be at that time. However, much like she defeated in Season 1, Jessica was able to overcome the hold his memory had on her by the time the credits rolled.

She told him (though he wasn't actually there) that she wasn't like him and she wasn't like her mother. Underneath it all, she was not a killer and was a good person trying to make the world a better place. It was almost as if she was trying to convince herself of that fact more so than him, but considering that he disappeared shortly after her speech, it worked. He left, meaning her conscience was clear. Well, for the most part, at least.

Before he left, however, he remarked that he would be around if she needed him, which may indicate that this may not be the only time he pops up in the franchise again. Perhaps this means fans could end up seeing more of him in Season 3. And I'm not going to lie — I would love that. I know he's a terrible person, but as a villain he was so compelling to watch, so if this turns out not to be his only cameo, you won't hear any complaints from me. Your move, David Tennant.