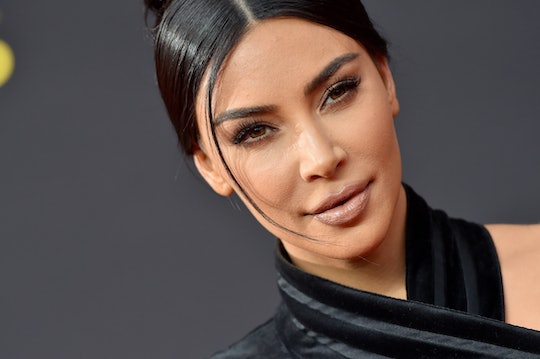 Those who keep up with the Kardashians know the family's patriarch — famous lawyer Robert Kardashian — died from esophageal cancer in 2003 and they, of course, have missed him dearly since. Nearly 17 years later, though, Kim Kardashian said she believes her late father has been reincarnated as her youngest son, Psalm West. The mother of four opened up about her beliefs in a recent interview with E! News and shared that she's not the only one who feels the 8-month-old has a spiritual connection to the past.

"My son, Psalm, is probably the happiest baby alive," Kardashian shared with E! News recently. "He's always smiling, always happy." She went on to explain why she believes Psalm has a special connection with Robert Kardashian Sr., specifically that he was her father reincarnated, referring to Season 16, Episode 4 of Keeping Up with the Kardashians.

"On our show, we showed that we were in Bali, and a woman — a blind medium — came up to me and said that I was gonna have another son and that it was gonna be my father reincarnated," the aspiring lawyer said, stressing that no one, not even the filming crew, knew that she and husband Kanye West had a surrogate pregnant with a boy.

In that episode, a translator listening to the medium tells Kardashian, "Your father's here."

"My father?" she replies. "He came," the translator clarifies. Not long after, the translator asks, "You have a second boy?" to which Kardashian says, "I have a boy that's coming in May,"

"That's where he's gonna be reincarnated," the translator declares.

During her recent interview with E! News, Kardashian then launched into a similarly chilling encounter involving her baby nurse, who took Psalm to a baby shower. "She brings him to a baby shower, and a woman comes up to her and said, 'Is this your son?' And she said, 'No, no, no, I'm just watching him,'" she recalled. "And she said, 'Well, I just have to tell you, please tell their mom this is a family member of hers reincarnated.'"

Apparently multiple people came up to the nanny and Psalm at the event to say that he's a family member reincarnated — and it's had a strong effect on the Kardashians' relationship with the youngest member of the Kardashian-West family.

"So my whole family, all the time, thinks it's my dad and is just so emotional and close to him," Kardashian told E! News. She also said that Psalm is left-handed, just like his late grandfather. "So, all these things happen. I don't even know if I believe in reincarnation, but I do now. But I want to believe it!"

Kardashian's mention of reincarnation is interesting, considering the Kardashian-West family's involvement in Christian practices. (Christians believe in resurrection, not reincarnation.) Kardashian and her kids were baptized in Armenia back in October and the following month, she and West attended Joel Osteen's Sunday service. Not to mention Kanye West's recent success in the Christian music realm.

Of course, just because a person identifies as a religion, doesn't mean they 100% agree with everything related to that religion. Personal beliefs aside, you have to admit, the recurring Psalm-being-Robert Kardashian-reincarnated thing is a fascinating string of coincidences.