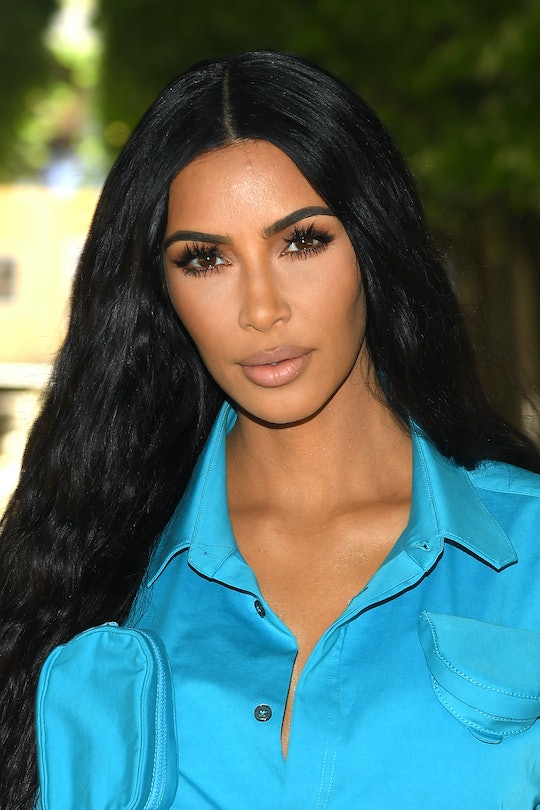 Prepare to be shook, Keeping Up with the Kardashians fans: Kim Kardashian did back-to-school shopping at Target with her kids. Yep, you read that correctly — Kardashian is just like every other Target-loving mama out there. Although this isn't necessarily earth-shattering news, it has left some some viewers reeling.

Just like anyone else would to start a new school year off right, Kardashian rounded up a few of her kids (apparently Saint, 3, and Chicago, 1) for a Target run. In a since-deleted post from her Instagram Stories account, Kardashian posted a snap of the kiddos riding in the famed red carts aka the bat signal for mamas everywhere. And the reality star presumably hit the aisles to start checking off items on what can feel like an endless back-to-school list.

I don't know about you guys, but I love the idea that celebrities aren't so vastly different from the rest of us. As long as you don't pay attention to some details on Kardashian's social media, such as that she's back from an ultra-luxurious family trip to the Bahamas or that she's launching a major new line of shape wear, Kardashian does indeed seem pretty relatable these days.

As for fans, however, many expressed shocked that Kardashian stepped foot inside an actual Target.

"Kim Kardashian is on crack if she thinks we’re gonna believe that she just goes to target for back to school shopping like a normal ass person lol," one person joked on Twitter.

Another commenter wrote: "I’m so shook that Kim Kardashian shops at Target."

KUWTK diehards shouldn't be too surprised by Kardashian's relatability, though. She recently admitted, for instance, that it's quite the task to handle a large family, even though she clearly loves being a mom and dotes on her four kids.

"Taking a pic with three kids was hard OMG this is almost impossible," she joked on Instagram earlier this month about trying to do a family photoshoot. Been there, Kim.

And while of course the business mogul has never been average, all the way from her expert design sense to her fancy belongings, she still has to live in the real world like anyone else. After all, she's juggling several businesses, four kids, and a commitment to pass the California bar exam so she can better advocate for prison reform, according to Vox. Sounds like pretty real world stuff to me.

Thankfully, this super mama was handed a bit of a gift in the form of a non-colicky fourth baby, having just posted that her "little man" is the "sweetest" baby ever. "He’s honestly the best baby," she said on Instagram. "Sleeps through the night and by far my most calm. How did I get so lucky."

Maybe moms of multiple children like Kardashian know they have to just roll with it, even if this means having people gawk at you when you go shopping for back-to-school supplies. Even someone as famous as a Kardashian probably likes to peruse Target, grab a coffee at the attached Starbucks, and check out the latest wares, right? Nothing too wild to see here, folks.