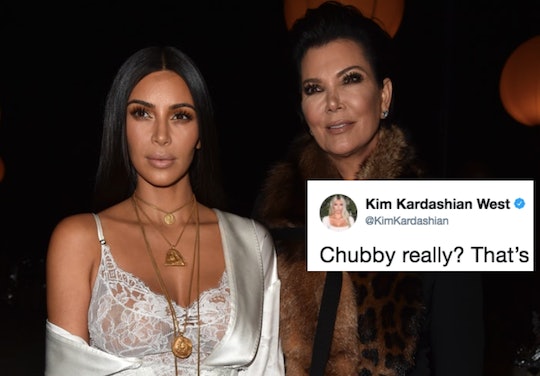 If you say something bad about Kris Jenner, Kim Kardashian West is coming for you. Any fan of Keeping Up With The Kardashians already knows this, and now one tabloid knows it, too. That's because Kardashian fired back at this headline calling her mom "chubby," and basically everyone on Twitter is cheering for her. Because good daughters need to be celebrated at every turn.

The Daily Mail published a story about momager of six Kris Jenner's younger days as a reported aspiring model and a junior flight attendant. The headline for the story reads, "Chubby-faced 22-year-old Kris Jenner models in never-before-seen shots." While the story paints a fairly typical portrait of Jenner as a bit of a grasping gold digger (despite the fact that she's widely considered one of the hardest working and most astute businesswomen in the entertainment industry these days), that wasn't what had Kardashian calling the publication out on Twitter.

Sadly, the KarJenner clan, including sisters Kourtney, Khloé, Kylie, Kendall, and brother Rob, have all grown accustomed to some pretty vial gossip in the tabloids. No, what really cooked Kardashian's goose was the fact that the headline identified her mom as "chubby." As she wrote on Twitter:

Chubby really? That's the headline? How about beautiful, youthful, stunning?!?!

Romper has reached out to the Daily Mail for comment on Kardashian's tweet regarding the article and did not receive an immediate response.

I actually really understand her fury at this headline; it seems irrationally unkind. Not to mention sexist; these sort of identifiers tend to be used primarily for women, especially in the entertainment industry, as a way to reduce them to simply the sum of their physical parts. And to see Jenner's happy little face smiling out in the pictures, unaware that she's being mocked... it's enough to make a daughter furious.

And Twitter was really here for Kardashian's simple, angry response.

Fans weren't just upset about the tabloid calling Jenner chubby; there was also some concern raised over the content of the article, which was based on an interview with an ex-boyfriend of Jenner's and made some wide sweeping (unfounded) assumptions about her motives at the time. Forgetting, of course, that the only person who would know a thing about Jenner's motivation to do anything is the woman herself. And she doesn't have to explain herself to anyone.

This isn't the first time Kardashian has gone to bat for her mom. When Caitlyn Jenner wrote a memoir, The Secrets Of My Life, about her gender dysphoria, she really went for her ex-wife in a major way. In the book, Caitlyn claimed that Jenner hoarded all of the money the family had made from their massively successful series Keeping Up With The Kardashians, according to E! News. And Kardashian eventually cut all ties with her former stepparent for this and other reasons, as E! News reported, with one of those reasons being her late father, Robert Kardashian. When Caitlyn wrote that the late Kardashian, who was a lawyer in the famous OJ Simpson murder trial, believed that Simpson was guilty, his daughter had enough. As she said in an episode of KUWTK, according to People:

My relationship with Caitlyn was strained. I was just trying to be respectful. But if you talk about my dad, I will cut you.

As a mother of two, soon to be three, herself, she most likely has come to understand the depth of the bond between a mom and her child, regardless of age. No matter what, your mom's going to be there for you. And you're hopefully going to be there for her like Kim Kardashian is for her mom. Think what you want of the KarJenner family, they have each other's backs at every turn. Clearly, this momager did something very right.