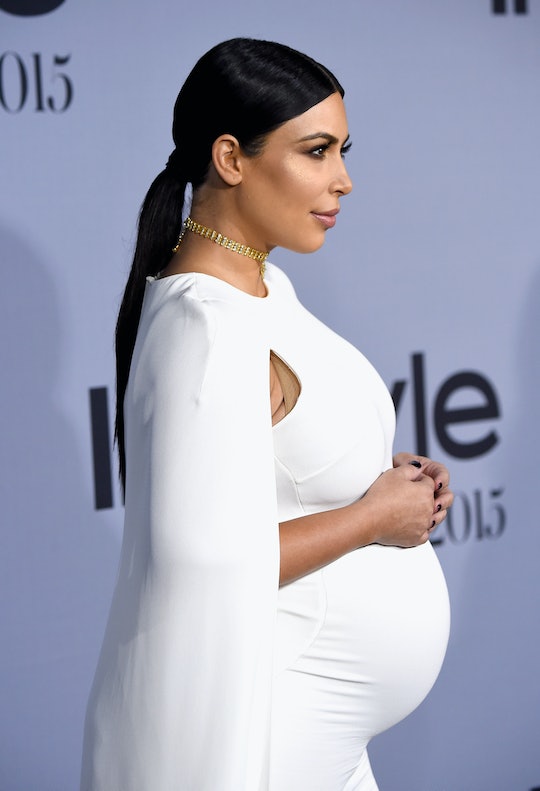 Kim Kardashian Had Her Baby, But We Shouldn't Forget Her Pregnancy

As you know because there is no way you could have missed it, Kim Kardashian and Kanye West had baby #2 Saturday morning. As expected, most of the Internet and the media’s attention focus was on what their son will be named and how the various members of the Kardashian-Jenner clan reacted, and that makes sense. The Kardashians have made it their business, literally, to make people care about this pregnancy. There were also lots of heartfelt congratulations, which is awesome. What's less likely to be a focus in the next few days are Kim Kardashian's pregnancy problems, and how vocal she has been about them in the last nine months, but they should be.

Pregnancy isn't enjoyable for Kim Kardashian. She expressed that most notably in October, in a post on her website titled, “From the Desk Of: How I Really Feel About Being Pregnant,” Kim wrote:

I'm gonna keep it real: For me, pregnancy is the worst experience of my life! LOL! I don't enjoy one moment of it and I don't understand people who enjoy it. My mom and Kourtney clearly did! More power to them but I just don't relate…

I'm not sure why I don't like the experience like others do. Maybe it's the swelling, the backaches or just the complete mindfuck of how your body expands and nothing fits. I just always feel like I'm not in my own skin. It's hard to explain. I don't feel sexy, either — I feel insecure and most of the time I just feel gross.People just don't tell you all of the gross things that happen during pregnancy or after. Do you know you basically have to wear a diaper for two months afterwards?! LOL! No one told me that! #SoSexy

It was a lengthier, more packaged version of similar thoughts she voiced at other times in this pregnancy and when she was pregnant with North. In early 2014, seven months after her daughter was born, she told Ellen DeGeneres, “Pregnancy was not a good experience for me,” and said, "I wouldn't really wish that upon anyone. Anyone.”

All of which makes sense, given that Kim had preeclampsia and placenta accreta during her first pregnancy. That is more than enough to leave you feeling not that positive about the experience. Additionally, Kardashian has dealt with gaining far more weight than she'd like (and being ruthlessly criticized for that) and, most recently, discovering her second baby was breech, only to have him turned in a painful external cephalic version (ECV) procedure. It makes sense that she doesn't like being pregnant, but the fact that she actually said it, repeatedly, in different ways, at length, is nearly unprecedented.

When you’re gestating another human, you’re supposed to be elated. The whole time. We know this cultural message is out there because it has taken so, so long for prenatal depression to receive any media coverage whatsoever. We also know it from the apparently ingrained responses people have when pregnant women voice any of the array of inviting symptoms and side effects pregnancy can entail. If you’ve ever been with child, you’ve probably been through this: you relay your physical discomfort to or confide your fears about labor in someone you perceive to be a sympathetic party, and that person’s answer is that you’ll soon have the baby, and “it will all be worth it.”

Technically, yes. Most pregnant and laboring women would probably say that any pain they suffered bringing their children in the world is outweighed by the existence of those children. But that response essentially serves to discard the pregnant woman’s feelings as insignificant, or worse, not even real. It suggests that the arrival of your child will erase anything unpleasant or even traumatic that occurred during your pregnancy or labor. That’s not how the human brain works. When something difficult or grueling happens to you, you don’t forget because an equally good or even amazing thing happened at the end of that grueling thing.

The prevalence of the idea that pregnant women are supposed to like being pregnant and, if they don't, must immediately discard those feelings as unimportant, is nowhere more apparent than when Kim herself ended her post, "Really, it is all SO worth it when you have your precious baby in the end! So for all my complaining, it’s 100 percent worth it and more!!!”

She may very likely have felt — and feel today more than ever — that it was worth it, or she may have felt she needed to say that to avoid criticism, or both. But that doesn’t erase the fact that she didn’t like being pregnant, it doesn't erase that that was a totally valid way to feel, and it doesn’t erase her having the guts to say as much.

For all of their late-in-life fertility and immediately svelte post-baby physiques and invisible armies of nannies, celebrities play an important role in eroding ideas about what the experience of motherhood should be. Brooke Shields’ openness about her postpartum depression in 2005 — and the fact that she had to defend herself against criticism from noted maternal health expert Tom Cruise, of all people — went a long way toward reducing the stigma around a disease that had previously been so shrouded in shame it was discussed only privately, in hushed tones. The same was true for hyperemesis gravidarum, the extreme, dehydrating first trimester nausea and vomiting that very few people beyond the individual women afflicted with it had heard of before Kate Middleton suffered from it – twice. Middleton’s reported struggle with the disease showed everyone that one of the most glamorous women in the world can be physically leveled by pregnancy. And when, one day, a female celebrity with kids admits that she doesn’t enjoy breastfeeding or that there are many aspects of motherhood that she doesn’t like so much, those will be huge moments, too.

Because when someone the rest of the world holds up as worth of attention and adoration admits to an experience that doesn’t fit our extremely narrow cultural definition of what a good mother thinks and feels, and crucially, when she refuses to be ashamed of that, she telegraphs the message that no one else who feels these things — and so, so many women past and present have and do feel them — needs to be ashamed of them either. And she draws a clear line in the sand for anyone — a relative, an intrusive stranger, the culture at large — who would shame a woman for those feelings. She’s essentially saying, it is no longer okay for you to decide what kind of mother I am.

Kim’s willingness to say that pregnancy was the worst experience of her life — that bringing another human into the world can be a worst experience of someone’s life even if the life it produces is, separately, a source of incredible joy — will have lasting impact. There's no way to know if that makes her terribly difficult pregnancies “worth it,” but many, many grateful women know what her words were worth.