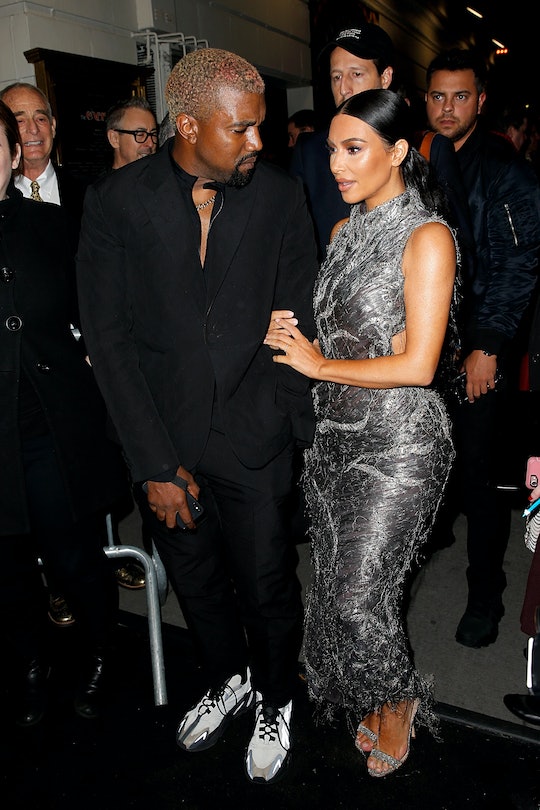 Though 2018 may have reached the apex of the KarJenner baby explosion (though, it is still early, who is to say we won't have another round of "triplet" boys?) it seems that the Wests are kicking off 2019 with another addition to their brood. Kim Kardashian hinted that her surrogate will deliver her fourth baby "sometime soon," meaning that she may have stayed mum on the pregnancy longer than we originally thought.

On Jan. 2, People confirmed that Kardashian and West were expecting their fourth baby together, via gestational carrier, as their last baby, Chicago, was delivered. “They have absolutely talked about trying for another baby with the help of a surrogate, but nothing seems decided for sure,” an insider told the magazine at the time. “Chicago is still little, and they have time.”

However, it's become clear that Kardashian may have let the news slip unintentionally. What isn't clear is whether or not the family was originally planning to wait until the new baby's delivery to announce the news, à la Kylie Jenner. If that's the case, it could explain why Kardashian is now saying that her fourth child is due "soon," meaning that her gestational carrier is perhaps a bit farther along than was initially assumed.

Now, Kardashian West shared with Andy Cohen on an episode of Watch What Happens Live that she spilled the news over the holidays. “I got drunk at our Christmas Eve party and told some people. I can’t remember who I told because I never get drunk,” she said.

She went on to confirm that the couple is expecting another boy, which wouldn't come as a surprise to anyone who has followed the family for a while. Kardashian has said on previous episodes of Keeping Up With the Kardashians that she and her husband, West, had one more embryo left — a boy — and later, People confirmed that Kardashian joked her daughter North was requesting another brother.

“North acts like an only child at all times. I think she’s a little confused,” Kardashian said. “She’s beyond jealousy now. She’s just like, ‘It’s my world.'” She continued: “She said to me the other day, ‘Mom… we just need to have another baby brother so that Saint can just leave me alone… so the girls can be on this side of the house and the boys can be on that side of the house.'”

For those who haven't followed the Wests throughout their pregnancy journeys, Kardashian can no longer safety carry and deliver children, after she gave birth to her son Saint in 2015. In Style reported that she has a condition called placenta accreta, which basically means that during pregnancy, the placenta intrudes into the uterine lining. It's really dangerous and potentially life-threatening, hence why the family has opted to utilize a surrogate (technically a "gestational carrier") to deliver Chicago, who turned one this month, and now their new son.

After her daughter was born last year, Kardashian said on Live With Kelly and Ryan that she "really, really enjoyed the surrogacy process," and that she and her husband were considering having one more baby. Of course, that all came to fruition very shortly after, as the Wests complete their family of six. We're wishing them well for now, and being sure to check Insta as frequently as possible for an update.