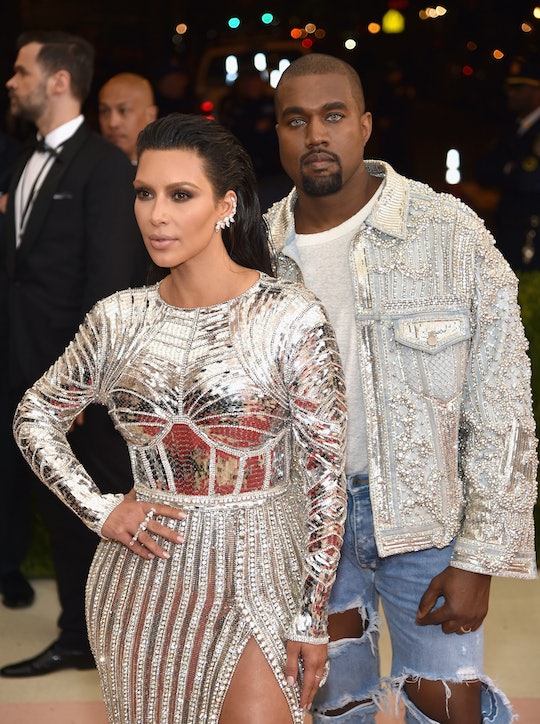 It's been a long journey to their third child for Kim Kardashian West and her husband, rapper Kanye West. Kim struggled through her first two pregnancies, and doctors told her she wouldn't be able to safely carry a third baby. All seemed lost for awhile, and fans of Keeping Up With The Kardashians will remember Kim's frustration at not being able to welcome a third baby. Well, what a difference a year can make. I can happily report that Kim Kardashian and Kanye West have welcomed baby number three, according to TMZ, and it's absolutely something to celebrate.

The couple reportedly welcomed a baby girl via surrogate on Monday, TMZ reported, though it's unclear if she gave birth in Los Angeles or her home city of San Diego. Kim confirmed the news via her app on Tuesday with the following statement, according to E! Online:

The couple spent the holidays in their new home in the Hidden Hills area of Los Angeles with their family, including their two kids, 4-year-old daughter North and 2-year-old son Saint, despite the fact that the house is not quite finished. People reported earlier in December that Kim and Kanye chose to spend the holidays at home to stay close to the surrogate who was carrying their third child. A source close to the couple told People:

They are spending the holidays in LA so they can be close to the surrogate. They are anxiously waiting for the baby to arrive. They seem more and more excited every day.

Fans have been waiting anxiously for the arrival of the third Kardashian West baby, and were quick to take to social media to offer their feelings on just about every aspect of the birth.

A lot of people want that name, dammit.

Others are convinced that Kylie Jenner gave birth to Kim's baby, especially after there were rumors Kylie went into labor just days before Kim's surrogate gave birth. (Way too coincidental...)

But some people quickly shut that sh*t down:

The KKW designer has been vocal about her desire to expand her family in the past. After Kim was robbed at gunpoint in Paris, she told her sisters during a spring episode of KUWTK that she felt the need to have a larger family even stronger than before.

I’d love nothing more than to expand my family and just know that I have this world at home that’s safe. And if for some reason I left this earth sooner than I really wanted to, then my kids would have a support system at home — so that I know that they would be okay if I wasn’t here.

Unfortunately, two fertility specialists told Kim that carrying a third child after suffering complications in her first two pregnancies was not a good idea. She even underwent a procedure that she hoped would help her safely carry her third child on an April episode of KUWTK, but it was unsuccessful. Kim opened up about exploring other options in a conversation with sisters Kourtney and Khloé, according to People:

After everything I went through, the surgery and it wasn’t successful and didn’t do anything. Kanye was really nervous about the surgery … but I know he would want to have more kids. I feel like surrogacy is the only option for me.

Since then, the couple decided to hire a surrogate to carry their third child. While Kim told Entertainment Tonight that having a surrogate was "so much harder" than pregnancy, she also said she felt "blessed' to have enjoyed such a strong bond with her surrogate.

And now, that blessing has grown in spades. Because the surrogate, whose identity has been rigorously protected, gave birth on Tuesday to a healthy baby girl, and I bet the Kardashian West family couldn't be more excited.

After struggling for such a long time with complicated pregnancies, difficult deliveries, and trying to adjust to having a surrogate deliver her third child, it seems Kim Kardashian West finally has the big family she's always wanted. Congrats to the family.