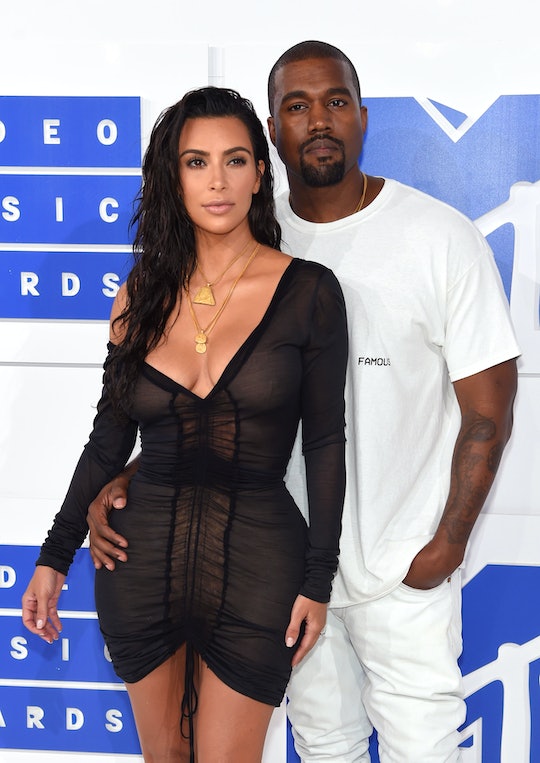 Kanye West has a reputation for being super straight-faced at all times, so when you catch a picture of him smiling it's actually almost confusing. I mean, we should all probably assume he smiles on the regular, considering his life looks pretty fun. He's married to Kim Kardashian West, he has three beautiful kids, a stellar career, and all of that Taylor Swift drama has finally calmed down. I guess he's got to keep up that whole cool guy thing, although sometimes he can't help breaking out a grin. Like when West and Kim Kardashian took the kids to the zoo recently; the Life Of Pablo rapper was all smiles in the pictures.

Kanye and Kim decided to take their 4-year-old daughter North and 2-year-old son Saint to the San Diego Zoo for a little family day on Thursday. Their third child, baby girl Chicago (who was born on Jan. 15) was not pictured with the family and presumably at home, since babies don't usually care about zoos. Kim snapped a series of pictures of the family clearly having a blast at the zoo, feeding the animals and checking out the penguins together. The most surprising sight of all, however, was Kanye crouched down with his son and a big, happy smile on his face.

I guess that's what the zoo does to people, folks. Brings out the smiles.

Kanye wasn't the only member of the family to be excited to have a day at the zoo; daughter North was full of big grins as she posed by the hippos and got to feed an actual elephant.

Kim Kardashian, who was the photographer for the happy day, came out from behind the camera to check out the penguins with North.

The Kardashian family has always been fond of the San Diego Zoo, as Kris Jenner noted in a 2014 birthday Instagram post when she wrote that she spent her first birthday at the zoo.

As for the Kardashian West family, this is the second weekend they have been out and about in the public eye. Last Saturday Kim and Kanye took North to the March for our Lives event in Washington D.C. to support survivors of the Parkland, Florida school shooting who were marching to call for an end to gun violence. Kardashian shared a picture of North sitting on her father's shoulders. She captioned the photo:

What an amazing day yesterday to take my daughter to Washington DC to see our future leaders speak. Having my daughter march along-side her grandfather and parents was a day I hope she remembers forever. I know that the younger generation will vote to change these gun laws that so desperately need to be changed. Hearing these stories yesterday and meeting so many families affected by gun violence was heart breaking and I hope when it comes time to vote we all step up and vote to protect our children.

A source close to the family told People that, while Kim and Kanye have incredibly busy schedules, they always prioritize time with their kids.

They don’t have the most traditional way of raising their kids because they’re so busy. When they’re not together, Kim and Kanye FaceTime with the kids and talk to them as much as they can.

Especially now that little Chicago has arrived, it probably feels especially important to make time for the older two kids who might be feeling a little out of sorts. So what better way than a day in the sunshine with the animals at the zoo?

No wonder Kanye is smiling.