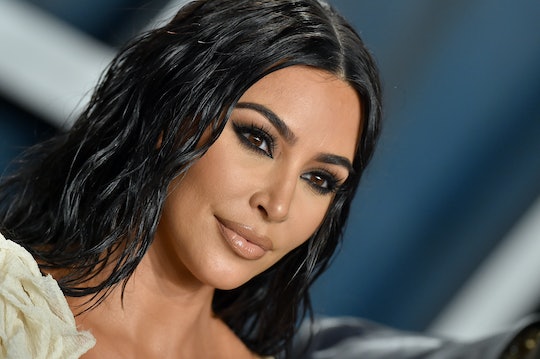 After some online backlash over the weekend from fans and fellow celebrities, like body positivity activist Jameela Jamil, about her pregnancy shapewear line, Kim Kardashian responded to criticism over her maternity collection from Skims with a lengthy message on social media. In her response, the Keeping Up With The Kardashians star refuted the idea that the product was created in an effort to slim pregnant bellies, and instead explained that the new Skims maternity garments were meant to offer much-needed support.

Kardashian's shapewear and loungewear brand Skims recently announced it will be launching a new maternity line on Sept. 16, which the reality star said on Instagram will feature "the best in comfort and support for your changing body during and after pregnancy."

After the announcement, The Good Place actress Jameela Jamil wrote an Instagram post that did not specifically call out Skims, but she did call out pregnancy shapewear in general. "I wish we could just Normalize just focusing on the inside of a pregnant body, not the outside. You don’t need your shape corrected or hidden. You don’t need an even more awkward obstacle between you and a piss. You just need to try and ride with this miracle and do your best to be as happy/comfortable as is possible within your circumstances. Pregnancy is hard enough, with enough worries already."

Jamil wasn't the only who shared concerns over the concept of pregnancy shapewear. Some took to Kardashian's post to ask, "Why though? I'm being serious," and another commented, "That seems dangerous."

On Sunday, Kardashian shared a Twitter thread addressing these concerns. "To anyone who has an issue with maternity solutionwear, and if you haven’t been pregnant before you may not know the struggle of what it’s like carrying all of this weight the way I did along with millions of strong women, @skims maternity line is not to slim but to support," the mom of four wrote.

Kardashian continued by noting the solutionwear was designed not to slim the belly but to provide "support to help with the uncomfortable weight being carried in your stomach which affects your lower back" as well as helping with pain relief from swelling."

The question of whether or not maternity shapewear is safe was addressed by Dr. Sherry Ross, author of sheology. The Definitive Guide To Women's Intimate Health. Period., who told Refinery29 that "as a general rule, shapewear clothing worn during pregnancy and postpartum has to be comfortable while providing support for your body. No pregnancy or postpartum shapewear clothing should overly compress and squeeze internal organs including ribs, abdominal muscles, liver, spleen and intestines."

In several follow-up tweets, Kardashian pointed out that her company had received "tens of thousands" of requests from customers who had requested maternity shapewear, and that she would have needed this type of product herself when she was pregnant.

She also tweeted that the new line has been getting rave reviews from "pregnant women around the world," including Chrissy Teigen, who's currently pregnant with her third child. Teigen shared a series of videos of herself wearing the maternity shapewear on her Instagram Story, which Kardashian also shared on hers, and said, "We're not trying to do anything to trick you, we're pregnant. We would just like to feel good about ourselves in a time where mentally, it can be really challenging." She added, "What’s the big deal? I don’t think I have some f**king magic waistline now. Do you guys think that? I’m not doing it to get a waistline. I merely want to wear underwear that’s pretty, that I feel good in, that’s soft, that’s comfortable, that stretches nicely over my belly, and that my p**sy doesn’t eat."

Kardashian ended her post by saying she's "incredibly proud to provide a solution that will provide comfort and support during the times that we all need it most, during pregnancy and after."