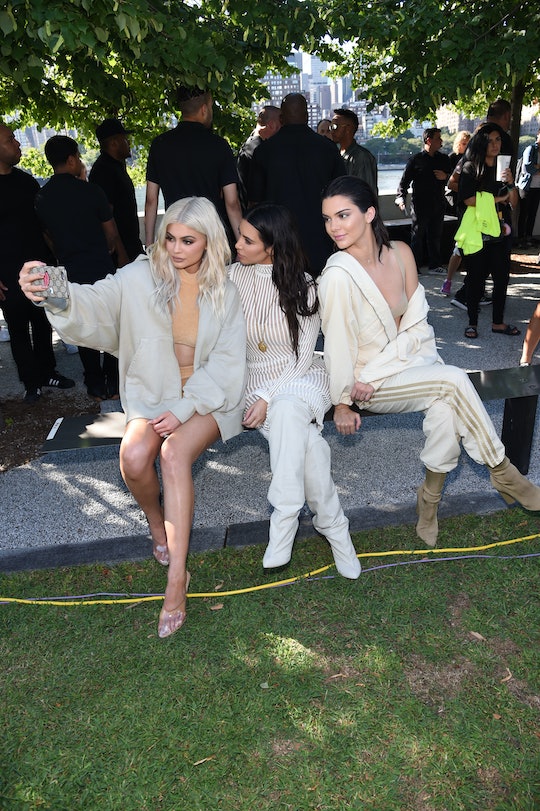 Kim K. Shared Photos Of A Mother's Day Card Kylie & Kendall Gave Her Years Ago & It's So Pure

When it comes to Mother's Day, it's not uncommon for people to use the holiday to celebrate the important women in their life, who have been like mothers to them, in addition to their actual mothers. For example, a grandmother, an aunt, or an older sister. Considering the age gap between some of the Kardashian-Jenner sisters, it's no surprise that the youngest of the brood — Kylie and Kendall — look up to their older sisters as if they were additional mothers. Recently, Kim Kardashian shared a card Kendall and Kylie wrote her for Mother's Day back in the day, and it shows just how strong the bond is between the KarJenner gals.

On Tuesday, Kim Kardashian took her Instagram followers on a trip down memory lane, as she filmed herself searching through old photo albums and mementos for her Instagram Story. Amongst the high school yearbooks, the collages of childhood photos, and even notes from her late father, Kim came across a card her two youngest sisters wrote her for Mother's Day one year, and she uploaded a video of the card to her Instagram Story.

"OK, last thing I'll show," Kim tells viewers of her Instagram story. "I found this Mother's Day card from Kendall and Kylie. Is this not the funniest thing ever?" (Side note: this was nowhere near the last thing Kim showed — her Insta story is a goldmine right now.)

The front of the card is decorated with photos of Kim, Kylie, and Kendall together, as well as glitter, rhinestones, and stickers that spell out "Happy Mother's Day, Kim!" Kim did not disclose what year the card was from.

On the back, each sister wrote Kim a super sweet message. Kendall thanked Kim for being like a mom to her and helping raise her and Kylie:

Kimmie, I know [you're] not a mommy yet, but I see you as a mommy to me! :) You helped raise me when I was little and [you're] always there for me and Kylie, that's why we made you this card! Kimmie I LOVE YOU! And thank you for always being there for me and loving me! Love, Kendall

Kylie, who apparently used to call Kim by a very interesting nickname, also told Kim that she was like a mom to her:

Kim-bertshnickle, I do love you very much and I know [you're] not a mommy but you can always adopt. Or have kids right now. I'm just kidding. But I didn't make this card because you can be a mom but that you are always a mom to me and [you're] there for me and you support me on whatever I do and you teach me right from wrong. I love you big sissy ❤️, Kylie❤️

It's clear that Kim has always been a role model for Kendall and Kylie — which is no surprise, considering the age difference between them. Kim is 37, Kendall is 22, and Kylie is 20. That means Kim was already 15 when Kendall was born, and nearly 17 when Kylie was born.

It's also no surprise that after helping to raise her younger siblings, Kim chose to become a mom. She welcomed her third child, Chicago, via surrogacy in January. Kylie welcomed her first child, Stormi, about two weeks later. Considering they are almost 17 years apart, it's safe to say they never thought they'd wind up expecting babies at the same time. Khloé Kardashian, the third KarJenner sister scheduled to give a baby in 2018, actually commented on this after Kylie announced that she had given birth. "Never in a million years did I think we would do this together but it's been that much more special because of it," she wrote to Kylie on Instagram.

It's clear that all five KarJenner sisters have a super close bond — though I can't help but wonder if Kendall and Kylie also wrote Khloé and Kourtney Mother's Day cards that year!