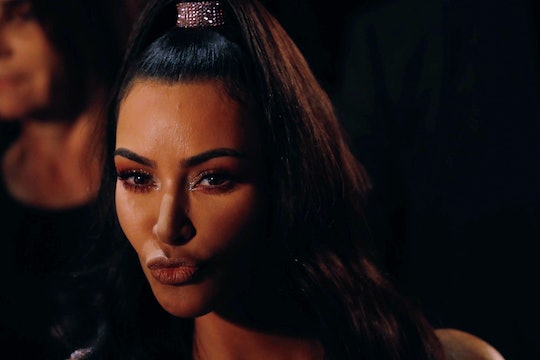 You Must Read Kim Kardashian's First Birthday Message For Chicago

It's always tough watching your baby turn into a toddler. Sure, there are probably times when it feels like the baby years are never going to end. When you're not sleeping and spend all your free time changing diapers and doing laundry and then a whole lot more not sleeping. But then suddenly, your baby turns one and life changes. The Kardashians know a little something about this stage, as the three famous 2018 baby girls get older all the time. Kim Kardashian West's birthday message to baby Chicago proves that time totally flies when you're having fun, even for the Kardashian crew.

Fans will remember that the KKW mogul and her husband, rapper Kanye West, welcomed their third child via surrogate last Jan. 15, daughter Chicago West. The couple are also parents to two older children, 5-year-old daughter North and 3-year-old son Saint. Since little Chicago's birth, she has been joined by two little cousins. Kylie Jenner welcomed daughter Stormi Webster with boyfriend Travis Scott on Feb. 1 while Khloé Kardashian gave birth to daughter True Thompson with boyfriend Tristan Thompson on April 12. But before there were the three girls, there was just one sweet little Chi. And as her mother wrote on Instagram on Tuesday, she has apparently turned out to be the "sweetest baby in the whole world."

As Kim shared in the caption:

Happy Birthday to my pretty girl Chi!!!! The sweetest baby in the whole world! Mommy and Daddy love you so much!

It's seriously hard to believe it's already been one whole year since the Kardashian baby boom got going with Chicago's birth, maybe because Kim has been a bit more private with her daughter in her first year than she is with her older two children. Although I have to say, I truly enjoy the frequent photo shoots with Chicago and True.

Chicago might only be one-year-old but it seems she is going to become a big sister in the near future. On Monday Kim confirmed that she and Kanye are expecting a fourth child via surrogate during an interview with Andy Cohen on Watch What Happens Live, as per E! News. The couple chose a new surrogate to carry their child in the summer, which means that Chicago will be a big sister before she turns two.

Lucky for her she's pretty accustomed to having lots of babies around.

As a mom of four, Kim is going to have her hands full making sure all of her children's emotional needs are being met. Perhaps especially little Chicago, since she'll be so young when she becomes a big sister. Now, Kim is a member of a big family herself and probably pretty well educated on the ins-and-outs of ensuring all of her kids know they're loved.

Which is perhaps why I think this little birthday message to Chicago has an extra layer of meaning to it. Kim wants to take a moment to celebrate the little baby she has been and the toddler she is about to become, before life gets busier and more complicated.

I totally get it.