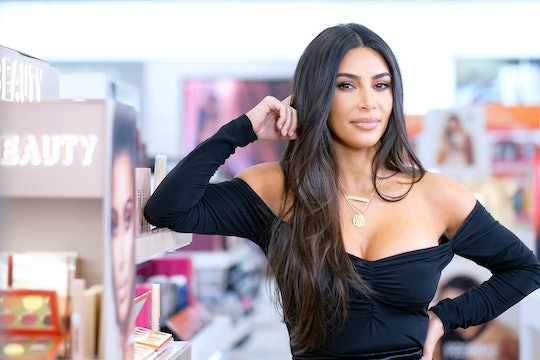 Kim Kardashian's Family Halloween Costumes Are Straight Out Of Bedrock

The Kardashians are making every Halloween harder. Do they have to be so amazing at pulling together not just one but several seamless Halloween looks that get better and better each year? In 2019 the famous sisters really nailed it, especially now that almost everyone has adorable children they can incorporate and accessorize. While all of the stars of Keeping Up With The Kardashians were inventive in several costumes, I think Kim Kardashian West might have won the grand prize. Kardashian West's family Halloween costumes are straight out of Bedrock, and she truly went all in with three of her four kids' looks this year.

The KKW mogul is having something of a pop culture moment this Halloween season. Before she shared her family costume on Friday morning, she stunned her many millions of followers on social media by channeling Elle Woods from Legally Blonde. Not just with a costume, mind you, but by recreating the iconic Harvard Law School admissions video Reese Witherspoon's character used to get into the prestigious school. Which was genuinely clever considering Kardashian West is actually going to law school at the moment. It must have taken a load of work to put such a video together, but this busy mom somehow managed to find the time to create a family Halloween costume with her 7-year-old daughter North, 4-year-old son Saint, 1-year-old daughter Chicago, baby boy Psalm and even dad Kanye West got in on the action.

Everyone, meet the Flintstones.

North dressed as Wilma Flintstone while her mom dressed as her best friend and neighbor, Betty Rubble. Little Chicago could not possibly have been any cuter dressed as Pebbles Flintstone. Please note that North is wearing a little bit of lipstick, despite the fact that her Kanye West has reportedly banned her from wearing makeup, as per People. Maybe he's alright with it as long as its Halloween and part of dressing up with her wig and costume and everything. Speaking of Kanye, he was actually part of the family costume as well. He dressed as Flintstone family dog Dino while little Psalm wore a caveman costume that looked truly adorable. Kardashian West shared a group photo on Instagram and pointed out it was no small feat to manage four kids in costume for a photo shoot. Which is why one of the kids had to be photo-shopped in after the fact.

As Kardashian West explained in the caption:

This family pic was such a challenge because Chicago was so scared of Dino! LOL We tried to explain and show her that it was just daddy but she didn’t get the concept yet! So shout out to the photographer for editing her in & making our family Flintstones dreams come true!

The rest of the Kardashian family had their own versions of family costumes, of course. Khloé Kardashian dressed 1-year-old daughter True in several costumes before sharing a photo of herself dressed as Cruela De Vil and little True was a Dalmatian pup. Kylie Jenner twinned with daughter Stormi as matching superheroes.

But I think Kim Kardashian West deserves a prize for best family Halloween costumes. Not just because they were incredibly detailed, but also because she had to come up with so many.

It's a numbers game.