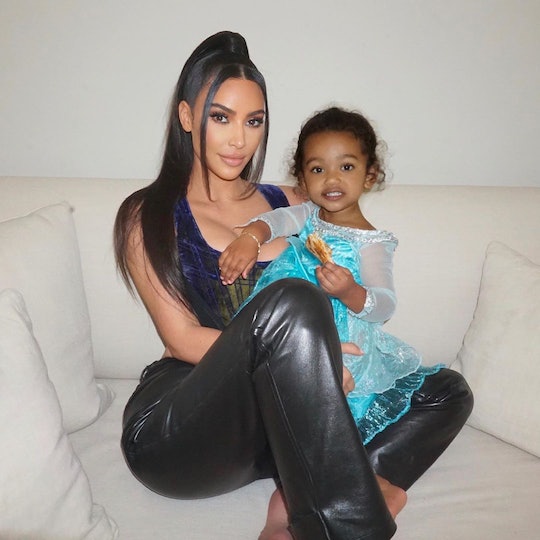 It’s a familiar scene. “You can hardly get ready without a kid coming in the room or, at this point, taking your makeup,” says Kim Kardashian West, whose children North and Chi have recently become very interested in what’s on her vanity. “It’s super frustrating, especially when you’re in a hurry,” Kardashian West tells Romper. Her childhood best friend, Allison Statter, feels her pain. “Kim has one more kid than I do, so the ratio doesn’t work in her favor.” For moms with interrupting kids everywhere, the two friends created a new KKW Beauty collaboration, available now.

The KKW x Allison collection adds two new shades to KKW Beauty’s line of lip crayons, two 3-in-1 face palettes, a 6-pan eyeshadow, and a clear, non-sticky yet high-shine lip gloss. The packaging features a collage of photos from Kardashian West and Statter’s friendship through their high school and college years — a fun throwback to the '90s looks that literally shine through the collection. “I love '90s makeup,” Kardashian West says. You can do any lip liner and a clear gloss and it looks so chic,” she says. “I wish I could give Allison a '90s makeover.”

Though Statter, who is CEO of the branding agency Blended Strategy, doesn’t officially agree to said makeover, she does agree that makeup was fun in those days. In fact, Kardashian West says of her friend, “For bigger events like prom and dances, she’d go all out and was super into mascara and the best basics.” The KKW x Allison collection brings the idea of the best basics full circle.

Each face palette contains a trio of all you need to streamline your face makeup routine: a matte bronzer that doubles as a contour, shimmery highlighter, and buildable blush. Best of all, the entire collection fits into a purse or whatever bag we’re using these days to carry around the entire family’s snacks and necessities. That’s one major goal Statter and Kardashian West had for this collection—to help moms condense their makeup.

“That's kind of how this collab came about—for moms on the go with really busy schedules,” says Kardashian West. Before kids, Statter says she had time to do a full face, complete with a lip and an eye look every day. Now, with three boys, not so much. Kardashian West also keeps a small bag these days. “I just have a small puff and little things for shine. I don’t even really have time to touch up,” she says. She had been eyeing Statter’s super organized makeup bag and the way her friend could put makeup on in the car or at her desk in the office when she realized that’s exactly what busy moms need. And busy moms doesn’t just mean moms working outside of the home.

Even at home, free time is not a thing for moms. “It's rare that I get a moment to do my makeup without some sort of interruption,” says Statter, such as asking her 80 questions between when she blends her blush and applies eyeshadow. Kardashian West’s kids helpfully play with her makeup while she’s trying to put it on.

Like Statter’s boys, my two use my bathroom/makeup time as a moment to seek my answers to life’s biggest questions. The first time I broke out the new KKW Beauty collection, I got through the Ladera face palette, two colors from the eyeshadow palette, both lip crayons for a layered look, and was about ready to top it off with the clear gloss before my 4-year-old came in. “Can you buy some more Robux?” he asked. “Nope,” I replied as I swiped it on, and I had a complete look. I timed the session at seven minutes, interruption and all. That’s the mom life. As Kardashian West says, “You just get used to it.”