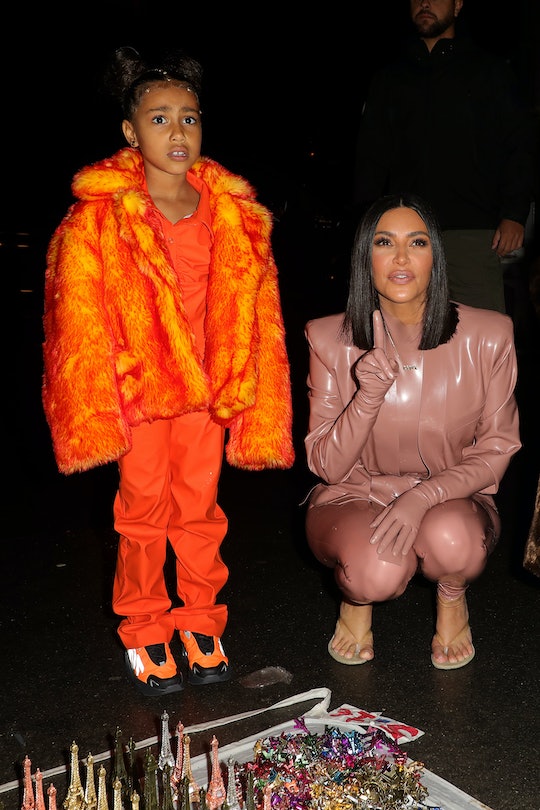 Like most moms right now, Kim Kardashian seems to be having a hard time trying to get a little privacy at home these days. Sure, she lives in a luxurious mansion, but even Kardashian can't totally hide from her kids. The mother of four recently tried to have a little time to herself to film a new makeup tutorial video in a guest bathroom, but as the footage proved, she was not successful.

Due to social distancing measures, the Keeping Up With The Kardashians star is currently spending much more time at home with her four children: 6-year-old daughter North, 4-year-old son Saint, 2-year-old daughter Chicago, and 11-month-old son Psalm. It's a busy household, of course, and it looks like Kardashian is feeling the struggle. Especially when she wants to do a little makeup tutorial for her millions of followers on Instagram.

On Thursday, Kardashian shared a new tutorial from her guest bathroom, calling it her "work from home beauty routine." Also, as she admitted at the outset of the video, she was sort of "bored" and decided it was time to share a little makeup session. All went well at first... and then her oldest child figured out where she was hiding. Suddenly, North appears just as her mother is trying to do some contouring and starts her campaign of distraction.

It starts out with North saying she needs to wash her hands and her mom is all nice and like, "Can you do it in the other room, I'm in the middle of something and I don't want to get this all wet sweetie." North is something of a dab hand at makeup tutorials herself, so perhaps she wanted a little screen time. But her mother was not having it.

Moms who watched the video related all too well to Kardashian's predicament. "All moms relate to this!! Lol Just 5 min pleaseeee," one mom commented, while another wrote, "Lol I find it so funny that it doesn’t matter that you’re famous, you’re just a normal mom trying to get some damn peace and quiet. I’ve never related to you as much as I did watching this video."

Kardashian eventually gets a moment to herself even as North stalks around behind her in the bathroom, and I know I have never felt more seen by a celebrity than watching this woman take deep breaths and try to ignore her child while enjoying this "one little fun thing for myself."

At the end of her hard-won makeup tutorial (which only lasts about eight minutes, so that really tells you how difficult it was for this mom to get time to herself), Kardashian says she's heading to the kitchen to be "harassed by my kids" again. Mostly though, she's feeling good about herself for getting out of her pajamas. I've never related to Kim Kardashian more.