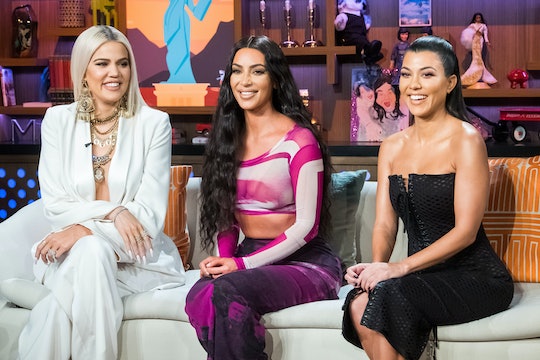 As the Kardashians have continued expand their famous brood over the years, I'm even more convinced that this family has some strong genes. Not only do Kim Kardashian and Kanye West's four adorable kids look very similar to each other, their youngest son, 6-month-old Psalm, is also the spitting image of his cousin, Khloé Kardashian's daughter True Thompson.

Over the weekend, Kardashian shared a series of photos starring her two sons, 4-year-old Saint and baby Psalm. In the photos, Saint is curled up next to his little brother, holding him so sweetly. Meanwhile, Psalm, looks so cozy and chill just hanging out with his big brother. "It doesn't get much sweeter than this," Kardashian captioned the precious photos.

What's even sweeter about these new pics? Plenty of Kardashian's followers pointed out that as Psalm gets older, he's starting to look a lot like his cousin, Khloé's 1-year-old daughter, True Thompson. "The lil one looks just like Khloé's baby girl," one fan commented, while another said, "Psalm looks like True." One more added, "He's True's twin."

Between their chubby cheeks, little button noses, and their eye shape, it's easy to spot their similarities. Especially when you have a look at an adorable photo of the two cousins from one of their playdates in October.

Even this photo of Kardashian's two boys had Aunt Khloé feeling a bit of baby fever. "Honestly!!!!!!" she commented on her sister's post. "They make me want a boy." This actually isn't the first time Khloé has said that she wants a boy. In July 2018, Khloé tweeted that before she had True, she "wanted a boy so badly." She wrote, "I felt confident in having a boy but God blessed me with my precious True and now I wouldn't know what to do with a boy."

While many are convinced Psalm is basically True's mini-me, others pointed out that little Psalm also looks a lot like his dad, Kanye West, as well as Kardashian's late father, Robert Kardashian Sr. No matter who you think Psalm looks like, I think it's safe to say he'll forever be a cutie pie.