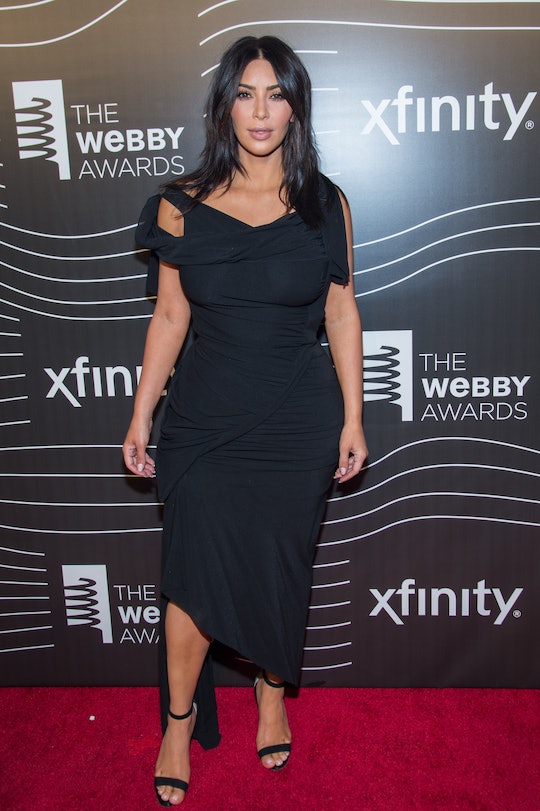 Another day, another Kim Kardashian Snapchat. Mom-of-two Kardashian has made no secret of her desire to get her pre-baby body back, and according to Cosmopolitan, she is taking her workouts very seriously in order to make that happen. In a recent video, Kim Kardashian shared her go-to workout routine, consisting of "running four miles, planks, pushups, 1,000 jump ropes, and abs" (umm...somebody pass me a doughnut). Coupled with her diet (Atkins40, according to The Daily Mail), and probably also some assistance from her beloved waist trainers, those workouts have not only allowed her to lose the weight she gained during her pregnancy with son Saint, but to proudly slim down to a 26-inch waist, according to People, which she showed off on a recent Snapchat video.

Kardashian has been chronicling her weight loss journey on the app, where she has shared her goal of reaching her "2010 Kim" weight of 120 pounds, and it seems like her diet and workouts are a huge priority to her right now. Her latest Kimoji updates even include a slew of "Kim working out" options, not to mention a variety of other Kims showing off a tiny waist and obvious thigh gaps.

There's obviously nothing wrong with Kim wanting to ramp up her workouts and slim down if that's what she wants — more power to her. After all, carrying around extra weight after pregnancy really bums some women out, and when you're photographed all day, every day, that pressure is probably magnified. But honestly, even without a 26-inch waist or her 2010 weight, Kardashian still looked great. And given that she's had two children in that six-year stretch, it's more than perfectly OK for Kardashian to never have that body back, just as it is for any woman who judges themselves more harshly after becoming a mother.

One month after her son was born, Kardashian revealed on Twitter that her 60-pound weight gain during her second pregnancy was a big motivator for her to dig into her workout and diet regimen.

As she lost weight along the way, Kardashian made headlines for her sharing some seriously-NSFW selfies on social media, and incurring a great deal of criticism as a result. But, according to BBC News, she hit back in an open letter noting that she didn't deserve to be shamed for simply being comfortable with her own body — and while she didn't mention it specifically, she also worked really hard for it, so no wonder she felt like showing it off.

The difficulty of course, is that, when it comes to body shapes, it seems everyone has something negative to say. Kardashian (and countless celeb mamas before her) are under extreme pressure not just to lose weight quickly after giving birth (and not gaining too much weight in the first place while pregnant, lest they have cute little pregnancy bumps), but they are also expected to talk about their weight loss at length, and even pose on magazine covers in bikinis to show it off. Kardashian, it seems, really is happy that she has been able to reach her goals, and that's great. But it's a shame that the post-baby-bod even has to be a thing.

A lot of mothers aren't going to spend hours at the gym working for 26-inch waists. A lot of other mothers might have returned to their naturally skinny weight but don't have the killer curves Kardashian has because they weren't born that way. Other mothers are embarrassed to put on bathing suits that don't hide their stretch marks or C-section scar belly overhang (I cannot possibly be the only one with that problem), feeling like it's something they should be able to control, when it reality, it's just what happened to them when they were pregnant and gave birth.

If you've busted your butt in the gym and lost your baby weight and are happy about it, then that is totally worthy of celebration. But isn't it way past time we gave up the "post-baby body" discussions? If you've had a baby, then your body is now a post-baby body. And no one should ever have to feel bad about that.