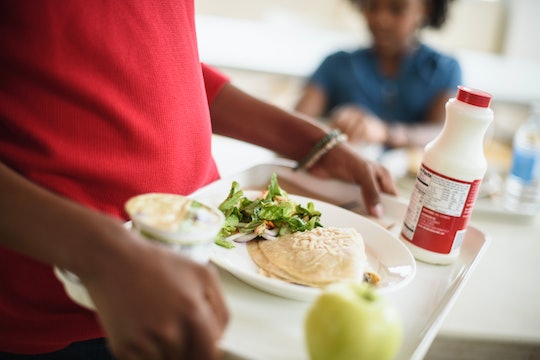 No, Children Shouldn't Feel The Need To Pay Off Other Kids' School Lunch Debt

When kindergartner Katelynn Hardee took it upon herself to sell drinks and treats as a means of raising money to cover her classmates' unpaid school lunch debt late last week, many on the internet quickly deemed the story heartwarming and inspirational. While the acts of kindness and generosity performed by children like Katelynn are certainly heartening to see, it's hard to celebrate a 5-year-old paying off classmates' school lunch debt.

In an interview with NBC News San Diego, Katelynn's mom said the kindergartner was inspired to set up a not-for-profit hot cocoa and cookie stand after overhearing another student's mother talking about how she couldn't afford the cost of an after school program. Ultimately, Katelynn's stand and thoughtful idea raised enough money for the 5-year-old to pay off 123 students' unpaid school lunch debt.

To be clear, Katelynn's compassion, generosity, kindness, ingenuity, and entrepreneurial spirit are all things that should be commended and celebrated, without question. Similarly, it's wonderful to see children learning about compassion, problem solving, and giving back to their community. In fact, Katelynn isn't the first child to step in to address a problem lawmakers have failed to fix. In June, for example, a 9-year-old boy in Florida used allowance money he'd been saving for sports equipment to pay off all of the lunch debt third graders at his school had accumulated. His kindness and generosity is also worth celebrating.

What's problematic about these stories, however, is the fact that the simple act of a child eating is putting families into debt — debt that other children are offering to cover with things like their allowance or selling treats. Something, a number of people on Twitter have been quick to point out.

"Can we stop acting like this s**t is heart warming," one user pleaded. "Lunch debt shouldn't exist. Having enough to eat should not be a privilege."

Others noted that, while incredibly kind and thoughtful, Hardee's actions shouldn't be necessary in the first place. "This is sweet but ALSO SHOULDN'T BE NEEDED," one Twitter user wrote. "Kids shouldn't be worried about their classmates not eating lunch because they have lunch debt. Fix this system."

For others on the social media network, Hardee's story was proof that a gross failure was being allowed to happen across the country. "That a five-year-old child recognizes the injustice of lunch debt before many adults is an indictment, not an inspiration," one Twitter user wrote.

As a result, some federal legislators have moved to try and protect kids from such attempts at shaming. Sen. Tina Smith and Rep. Ilhan Omar's No Shame at School Act, for example, would bar schools from shaming or publicly identifying students with lunch debt. The bill also aims to increase the number of children eligible for free or reduced-price school means. Other legislation aimed at increasing children's access to school meals is The Universal School Meals Program Act, which was introduced by Omar and Sen. Bernie Sanders in October. If passed, it would prohibit schools from denying a child a hot meal at school and reimburse schools for all delinquent meal debt. Unfortunately, neither bill has yet to be voted on by Congress.

So while the kindness and generosity of kids like Katelynn Hardee should be commended, as a whole, the trend of children paying off other children's meal debt highlights a troubling problem adults need to fix.