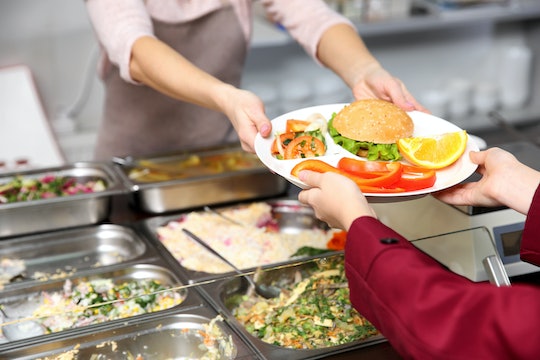 After intense public outrage, the Pennsylvania school district that threatened to punish unpaid lunch debts with foster care will now offer every student free breakfast and lunch. In an apology to parents, the Wyoming Valley West School District said it had qualified for a national school lunch program and would thus be able to provide all students in the district with two free meals per school day for the next five years. As for the unpaid lunch debt, the school district also announced it had changed its mind about rejecting a local donor's offer to pay off students' cafeteria bills.

"For the first time our district fully qualifies for the Community Eligibility Program," the district's school board said in an undated apology letter recently issued to parents. "As a result, all students of the Wyoming Valley West School District will receive free breakfast and lunch in all of our schools for the next five years regardless of income."

According to the U.S. Department of Agriculture's Food and Nutrition Service, the Community Eligibility Provision is a non-pricing meal service option. It enables schools and school districts in low-income areas of the United States to provide all enrolled students with free breakfast and lunch without the students having to submit applications or information about their parent's income level.

After initially refusing to accept Carmichael's offer to pay off students' $22,467 in lunch debt, the board announced it had changed its mind. "We have decided to accept Mr. Carmichael's generous donation," Mazur wrote in the board's recent apology to parents. "It will be directed to the Wyoming Valley West Educational Foundation to eliminate the debt owed by the parents."

In comments to the Wilkes-Barre Citizens' Voice, Carmichael said he was happy the school district had ultimately agreed to accept his offer to pay off any unpaid lunch debts. "I believe in being a good neighbor and I believe in decency," Carmichael said, according to the Wilkes-Barre Citizens' Voice, noting that he viewed his donation as an opportunity to pay forward the success he'd experienced since growing up poor and reliant on free school lunch programs. "Any CEO or successful person, anyone who looks back on their life, has to have had good luck or good fortune. Sharing a little bit of your good luck is part of the process."

Parents were furious to receive letters threatening to place their children in foster care if lunch debts remained unpaid, as WNEP reported earlier this month. As the BBC reported, the letter that warned parents said that if a child was sent to school without money or food, their parents could be taken to court: "If you are taken to Dependency Court, the result may be your child being removed from your home and placed in foster care."

In announcing they'd qualified for the Community Eligibility Program, the Wyoming Valley West School Board also apologized "for the tone" it had taken in the unpaid lunch debt warning. "It wasn't the intention of the district to harm or inconvenience any of the families of our school district," the board wrote. "Please accept our sincere apology."

More Like This
The Best Toys For 3-Month-Olds
21 A+ Christmas Gifts For Teachers
Blake Lively Reveals The '90s Disney Movie She's Watched "Too Many Times"
13 Organizations Doing Incredible Work For Moms, Babies, & Families