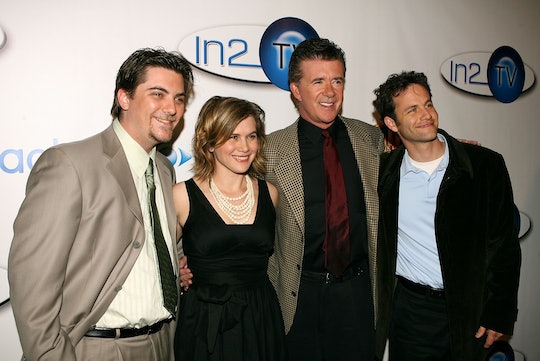 Alan Thicke will be remembered for many things; he was a composer, a game show host, an author. But for many of his fans, he will largely be remembered as America's favorite dad on the '80s sitcom Growing Pains. And judging from Kirk Cameron's reaction to Thicke's death, that's exactly how his former co-star remembered him as well. A great dad, gone too soon.

Thicke died at the age of 69-years-old on Tuesday as the result of a massive heart attack. He was playing hockey with his youngest son, 19-year-old Carter. After complaining of chest pains he was rushed to Providence Saint Joseph Medical Center in Burbank, California; Thicke was pronounced dead on arrival. The beloved Canadian actor, whose career has spanned 40 years, leaves behind three sons (Carter, Brennan, and musician Robin Thicke) as well as his wife, Tanya. Many of his peers in Hollywood took to social media to offer their condolences, but it was the sweet, sad message from his one-time TV son, Kirk Cameron, that felt especially poignant. Cameron played Thicke's son, Mike Seaver, from 1985 to 1992 on Growing Pains, and posted a throw back picture from those days to Instagram to share his feelings about the recent loss of his one time "TV dad."

Cameron captioned the photo with the message:

I spent Monday through Friday for seven important years with Alan Thicke as my "TV dad." I'm shocked and truly heartbroken today at the news of his death. Alan was a generous, kind and loving man. I am so blessed to have grown up with him. Chelsea and I send our love and prayers to his family tonight. We will cherish the memories... "sharing the laughter and love."

Cameron, who actually met his wife, Chelsea Noble, on the set of Growing Pains when she played his love interest, wasn't the only cast member to publicly mourn their former co-star. Thicke's former TV wife, Joanna Kerns, took to Twitter to remember Thicke as "one of the smartest and funniest men" she has ever met.

The cast of Growing Pains reunited in 2000 for a reunion movie, after an eight year hiatus. At the time, Thicke spoke to The Los Angeles Times about his years as part of a close knit group of actors, when the cast celebrated holidays and birthdays together.

In the early days of 'Growing Pains', we communed all the time. Nobody would ever have a party without the whole gang being there.

While that may have changed after the series ended with people drifting apart as often happens, clearly Thicke's former co-stars still remember him well. As a good man, a talented actor... and everyone's favorite TV dad.