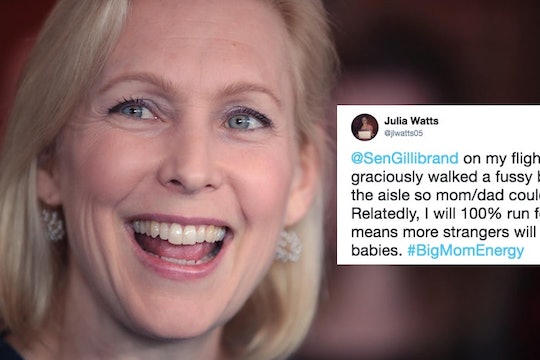 Kirsten Gillibrand Soothed A Fussy Baby On Flight With Her "#BigMomEnergy"

Now that we're around the halfway mark for 2019, people are starting to think seriously about 2020 presidential race. About the big, important, clearly life-altering decisions that need to be made with their votes. After what happened in 2016, I like to think that people are going to be much more vigilant and pay far closer attention to how the presidential candidates behave, on the campaign trail or now. Do you know what gets my vote? Someone who wants to protect my reproductive rights and OK, maybe someone who is a dab hand with a cranky baby. So when Sen. Kirsten Gillibrand helped parents with their fussy baby while they were on a flight recently... I mean, I'm not saying she deserves the presidency right now, but she definitely deserves consideration. That is no small feat, my friends.

The Democratic senator from New York and presidential hopeful was on a flight Tuesday morning when fellow passenger Julia Watts got a picture of her doing something fairly incredible. There was a baby on the flight who didn't appear to be enjoying the experience as much as one would think a baby should enjoy being locked inside an airplane with hundreds of strangers.

Well, Sen. Gillibrand stepped in to give the parents a break by walking the little one up and down the aisle. "@SenGillibrand on my flight this am," Watts shared on Twitter. "She graciously walked a fussy baby up and down the aisle so mom/dad could rest a minute. Relatedly, I will 100% run for president if it means more strangers will let me hold their babies. #BigMomEnergy."

First of all I really hope the hashtag #BigMomEnergy goes viral because it's my new favorite thing. My second favorite thing being the senator's response to Watts' tweet.

"It's definitely one of the perks," Gillibrand responded.

Gillibrand's compassion for parents who are struggling is very on brand for her political platform as she has made parenting one of her top priorities as a presidential candidate for 2020, when she will go up against President Donald Trump among others.

In fact, according to Marie Claire, when Gillibrand first announced she was going to throw her hat into the presidential race during an interview on The Late Show With Stephen Colbert back in January, she told the talk show host, "As a young mom, I am going to fight for other people’s kids as hard as I would fight for my own."

I'm sure there will be plenty of critics out there who insinuate this was all a ploy to garner favor with voters, that the senator probably hired that baby to get fussy or something hilarious along those lines. But personally, I agree with this social media user who noted that using a person's skills with a child is not the worst way to make a political decision.

"I do not have children, but I am 100% all in on 'would trust them with my child' as Presidential litmus test," one person wrote on Twitter in response to Watt's tweet. "(Way more than the 'have a beer with them' test.) it must be said military parents do have to trust the President with their children as well!"

If these people trusted Sen. Gillibrand to hold their baby, perhaps voters who are considering all of the candidates can trust her to take care of the country. Because really, would it be so terrible to have a president who has #BigMomEnergy? No, it would be wonderful.