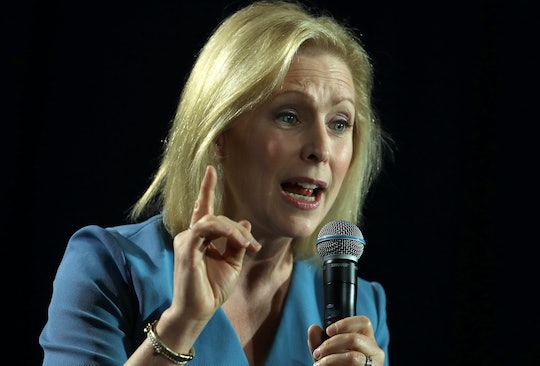 The second round of debates between the Democratic presidential hopefuls got off to a pretty strong start on Wednesday night in Detroit, Michigan, with many candidates answering tough questions about their proposed health care policies. And one of the most impassioned responses came from New York Sen. Kirsten Gillibrand, whose stance on health care earned a round of applause from the audience. That's because the politician reminded voters that health care is a right, not a privilege.

After Vice President Joe Biden and California Sen. Kamala Harris got into a debate about their own opposing health care plans, Gillibrand got specific with her own plans, stating what she'll do if she's elected president in 2020. She noted that Democrats like herself are not in the habit of trying to take away health care, arguing that Americans shouldn't have to struggle to afford it.

"Let's not forget what the Republicans are doing. Because the truth is, the Republicans and Trump, their whole goal is to take away your health care, to make it harder for you to afford it, even if you have pre-existing conditions," according to The Washington Post.

Furthermore, she pointed out that people should stay focused on what is truly important — making health care a right in America, not a privilege. Heck yes.

Gillibrand has discussed this point before, bringing it up when she co-sponsored the Medicare for All Act in 2017. She said in a statement, according to her campaign website:

Health care should be a right, not a privilege, so I will be joining Senator Bernie Sanders as a cosponsor on his Medicare-for-All legislation. And I was especially pleased to work with my colleagues to help write the section of the bill about letting every American buy into a not-for-profit public option, as part of the four-year transition period that leads to single-payer.

She continued, "This would create an affordable, public health care plan that’s available to any American to purchase through the already-existing insurance exchanges."

Gillibrand illustrated her stance on this important issue with a personal anecdote Wednesday, sharing her own deeply personal story about bringing her son, Theo, to the emergency room with a severe allergic reaction as a young mom, according to The New York Times. "The insurance companies for these plans that rely on insurance companies, I’m sorry, they’re for-profit companies," she said. "They have an obligation to their shareholders."

Of course, Gillibrand realizes it will take time to enact positive change in this arena. In an interview with Elle regarding medicare, she said:

You’d have to fix Medicare first, make sure the reimbursement rates actually reflect costs. But that is how you do it, through competition and through choice, letting people choose it. And I wouldn’t be surprised if within five years, 90 percent of Americans actually bought in, and then it’s a very small leap to make it an earned benefit just like social security, so it’s there no matter what. That’s how you make it universal, affordable, and permanent.

Gillibrand has a long fight ahead of her, but she clearly has some solid ideas about what her presidency would look like, especially where it concerns health care.