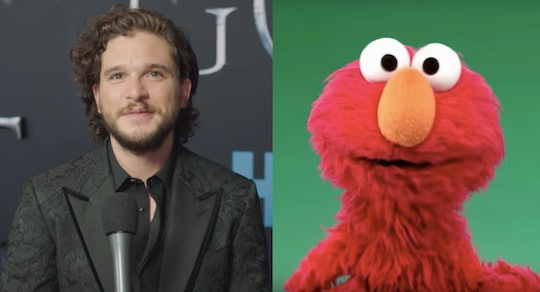 Game of Thrones' Jon Snow is not known for his sense of humor. His integrity, yes. His well-defined abs? Most definitely. But he doesn't really bring funny to the table, what with all of the fending off White Walkers and being brought back to life and such. But what about the man who plays Jon Snow, Kit Harrington? Is he a funny guy? Well, Kit Harrington appeared on Sesame Street recently, so I'm feeling confident about his funny bone. Almost as confident as I feel about his very amazing shoulders.

The concept behind the #ShareTheLaughter challenge, which is what Harrington took part in, is simple; laughing makes people happy, so pass it on.

Several stars have climbed aboard the laughter train and accepted the challenge, and now it seems Kit Harrington has decided to join the fun, as well. Which makes sense after last week's Game of Thrones episode, "Beyond The Wall." No spoilers here, but things are getting dark and murky and confusing. Clearly Jon Snow could use a little joke. And so that's just what Harrington shared; a cheesy little joke.

In the video, which Sesame Street shared on YouTube, Harrington told this knee slapper:

What do birds give out for Halloween?

If there be a court jester at Winterfell, his or her job is pretty safe, me thinks.

Harrington wasn't the only Game of Thrones cast member to accept Elmo's challenge; Gwendolyn Christie, otherwise known as Brienne of Tarth, also took up the challenge.

Why can't a Tyrannosaurus clap?

Unfortunately, neither Harrington nor Christie seemed to have gotten the memo that they were meant to pass along the challenge to spread the kindness and forgot to challenge the next person (although fair point to Christie, she challenged everyone watching). They could have taken a page out of Saturday Night Live's Kate McKinnon's book when she started the challenge with Elmo. She passed the challenge on to Cookie Monster for National Joke Day, and her joke was pretty great.

What did the hamburger name his daughter?

So here's the situation; Kit Harrington told a cute joke for kids who probably don't really know who he's supposed to be. Parents probably loved it. And the world is a better place because he is in it. End of story.