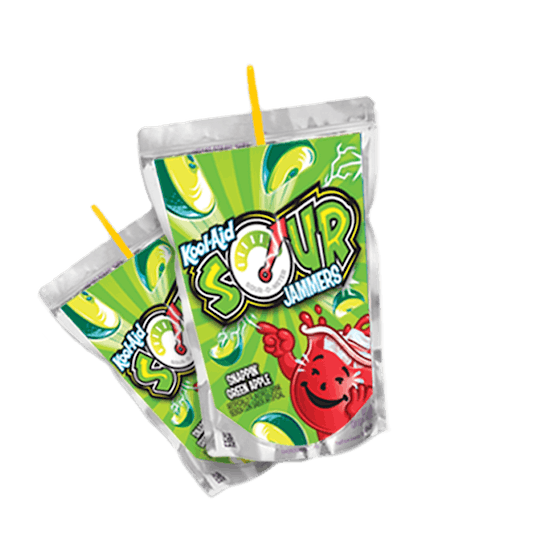 When I was a kid, I always felt like it was a rite of passage during the summer time for all the neighborhood kids to have what we all called Kool-Aid mouth. I was the weird kid who only liked to drink water, so I never got to enjoy Kool-Aid mouth, but there was one kid in our neighborhood who perpetually had a red or blue ring around her mouth 365 days a year. Bree, this article is for you, because even though you’re probably in your 30s, you’d be excited to know that Kool-Aid Sour Jammers are here for your enjoyment. “Oh, yeah!”

As of April 17 — and at just $2 for a 10-pack — the Kool Aid Sour Jammers come in five brand new flavors: Slappin’ Tropical Punch, Snappin’ Green Apple, Shockin’ Blue Raspberry, Electric Lemon Lime, and Watermelon Slam. And apparently there has never been another sour beverage for kids available — until now — according to the press release. And if the new flavors weren’t enough excitement for Kool-Aid fans, the Kool-Aid man will also be “krashing” social media to get everyone stoked to try the new sour flavors. On Snapchat there will be interactive filters and lenses, and on Instagram, if you follow @koolaid, you can watch “hilarious videos” of the Kool-Aid Man “krashing” sweet moments “with a fun and sour twist.”

Is sour not you or your kids’ forte? Luckily for you, they have 12 other varieties of Jammers flavors. There’s Blue Raspberry, Peach Mango, Grape, Tropical Punch, Strawberry Kiwi, Lemonade, Cherry Limeade, Watermelon, Orange, and Sharkleberry — which is apparently a combo of strawberry and orange. And if you’re more of a traditionalist and consistently keep the old skool version of Kool-Aid in your pantry — you know, the powdered version — there are a lot of things you can do with it this summer besides drink it. There’s Kool-Aid tie dye — for shirts and Easter eggs — you can make Kool-Aid modeling clay, Kool-Aid glue art, and even Kool-Aid water colors. If you’d rather taste it than play with it, Kool-Aid also has a ton of fun recipes that are perfect for summer, like these super-cool looking Kool-Aid rainbow drinks and Kool-Aid galaxy slushies. Still a kid at heart but want your Kool-Aid turned into an adult beverage to sip on your patio? Home Wet Bar has some delicious and easy-to-make Kool-Aid cocktails for your drinking pleasure.

Though the Jammers come in a cool pouch where you "jam" a straw into them, if you want your kid to have the coveted Kool-Aid mouth like we all did in the '90s, you can always pour these sour concoctions into a glass and have them drink it without a straw. Bree, I hope you're reading this and I hope you run to your nearest store to grab a case of these. I have a feeling you'll love them. I don't care if you're in your 30s now. Maybe now you can pour some of these in with some gin and tonic?

More Like This
Eden Grinshpan On Getting Your Kids To Love Fish Eyeballs (Yes, Really!)
The Best Apple Orchards Near Upstate New York
Baby-Led Weaning: A Comprehensive Guide To Introducing Solids
Molly Yeh Draws The Line At Hot Pockets