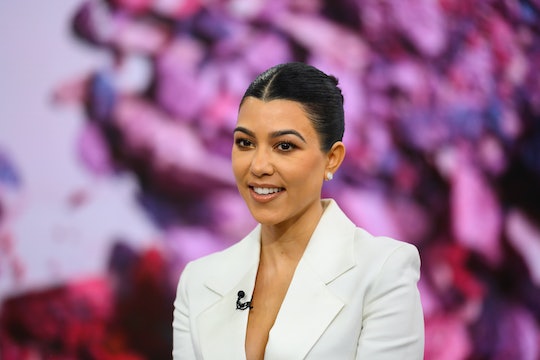 There was a time in our past when people actually believed that little girls should have long hair and little boys should have short hair. This time was called the 20th century; hair was a pretty big deal in those days, I guess. It was seen as symbolic for most people, a way to categorize gender on sight. While that attitude has changed for some people, there are still plenty who'd love to go back to the olden days of stereotypes and weird hair obsessions. Like recent trolls of Kourtney Kardashian who've criticized her son Reign's hair. But don't worry, the fierce mom of three has shut down this nonsense with a simple response that will hopefully discourage people from commenting again.

The Keeping Up With The Kardashian star is mom to three adorable kids with ex-boyfriend Scott Disick, 9-year-old son Mason, 7-year-old daughter Penelope, and 4-year-old son Reign. She recently shared photos from a family getaway to Santa Ynez, California on Instagram. The photo were all sweet and seemingly innocuous; her kids doing things like playing in the dirt, perching on tractors, hanging out with a dog. But the main image of Reign hanging out at a camper and holding on to the lead of a pony appeared to really rankle at least one of her followers on social media.

One person had some advice for the reality star based on the photo, and I feel I should point out the advice was definitely unsolicited. "She really need to cut his hair," the person wrote.

Now this is not the first time the Poosh founder has heard this suggestion, especially since she has a history of letting her children grow their hair long for the first few years of their lives. Back in November 2018, for instance, she had critics coming for her when she shared a poolside photo of Reign with long, wet hair. People were apparently upset back then because her little boy had long hair and also looked cold, according to Allure.

While Kardashian tends to ignore most of the commentary about her life on social media, this time around it seems she couldn't help saying something in response to that comment about her son. "She really need to not worry about kids that aren't her own," Kardashian replied. "He's a happy boy."

I mean, it shouldn't have needed to be said, but now that Kardashian has addressed it perhaps that will be the end of it. Certainly her other followers were quick to defend Kourtney and Reign. As one follower commented, "not your kid, not your place to have input." Another said, "That’s your opinion! that’s not your kid."

Unfortunately there were still more than enough people who didn't approve of Reign's hair, with one person defending her criticism because she was ostensibly "worried" about how difficult it would be for the young boy to be active with long hair. An issue that is almost never brought up for little girls with long hair, of course.

There is simply no reason why little boys for little boys not to have long hair. I've never understood this obsession with hair on kids, and I'm glad Kourtney Kardashian refuses to bow to public pressure to conform. Personally I love Reign's hair. And clearly so does he.