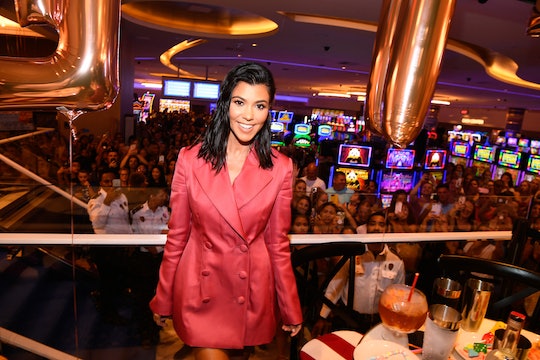 Kourtney Kardashian Slammed A Follower Who Criticized Her On Stormi's Birthday

Stormi Webster just turned one, if you can believe that piece of news. Of course all of the members of the Kardashian/Jenner family were celebrating Kylie Jenner's little girl with social media posts and such. But what happens if one member decides to deviate a little? Post something else on Feb. 1, which I guess is now Stormi Webster Day? Does this mean that person doesn't love the little girl? Apparently this is what some people tried to insinuate. Kourtney Kardashian was criticized for a picture on Stormi's birthday, and as usual it's utter nonsense.

On Friday the mother of three took to Instagram to share a picture, but it wasn't a montage to her niece Stormi. As Kardashian fans are already well aware, Kourtney tends to keep her Instagram lit up with sexy selfies, which is exactly her business and shouldn't really be cause for concern for anyone else in the world. If she feels confident and happy sharing gorgeous pictures of herself, more power to her. Friday was business as usual. The Keeping Up With The Kardashians star shared a picture of herself sitting with her back against a bathtub, sporting a lace bra. She captioned the photo "Busy until further notice."

Some fans really took umbrage with this particular photo, seeing as how it was shared on Stormi's birthday and all. One user in particular wrote on her Instagram feed:

the most touching birthday wish for stormi.

It's almost as though someone was scrolling through all of the Kardashian/Jenner feeds like the social media police, keeping tabs on who was saying what about Stormi.

Who, by the way, looked to be having the time of her life being feted by her entire family for the day.

Generally speaking I think all of the Kardashians, including Kourtney, tend to avoid engaging with critics and trolls. As a family they must have had to develop a thick skin when it comes to people attacking them for existing. But this particular insinuation clearly rankled with Kourtney. Perhaps because it was concerning her loyalty and love for a member of her family, something the whole clan takes immense pride in (and it's also considered the secret to their success by some).

Kourtney clapped back with an excellent point:

she doesn't have Instagram yet, but Stormi if you're reading this Happy 1st Birthday!

She went on to share a short video of herself holding Stormi in a tiny Burberry dress on her hip, writing in the corner as per Us Weekly, "My little Stormaloo how I love you so angel girl. Happy Birthday!"

I think there are a lot of things the Kardashian/Jenner family are willing to let slide when it comes to critics. People saying they're famous for nothing, they're talentless, they're spoiled. But it seems to me that the one thing that will have a member of this family up in arms is an attack on their family loyalty.

Perhaps especially when it comes to questioning their love of their children.