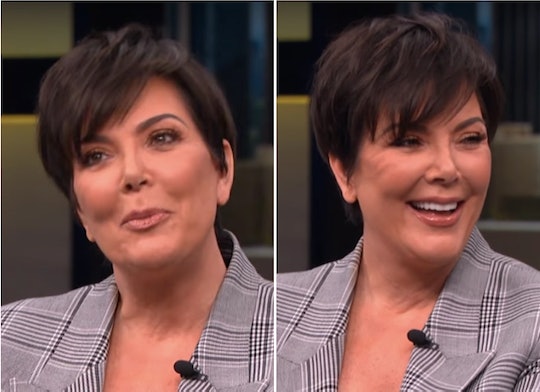 Kris Jenner is arguably the most business-savvy woman working in Hollywood today. Say what you will about Jenner, and I know you will, but she has managed to cultivate a sustainable empire with her children that should keep them comfortable for generations to come. Honestly, would you blame her if she made a slight slip-up every once in a while? That's what fans thought happened when Jenner recently posted a pic on Instagram of some kids' Christmas pajamas; some thought she had accidentally announced her daughters' rumored pregnancies. Apparently, fans were wrong and Jenner has broken her silence about the kids' pajama photo during a recent interview, and of course she covered her bases.

As the entire world and probably large swathes of the rest of the universe are aware, three of Jenners' daughters are reportedly pregnant, but only one has been officially confirmed. Keeping Up With The Kardashians' star and KKW owner Kim Kardashian-West is expecting her third child via surrogate with husband, rapper Kanye West. However, there are two other rumored pregnancies in the family; Life Of Kylie star Kylie Jenner is reportedly expecting her first child with boyfriend Travis Scott. And Revenge Body star Khloe Kardashian is also reportedly expecting with boyfriend, Cleveland Cavalier's Tristan Thompson, according to Us Weekly.

While neither Kylie nor Khloe have addressed their pregnancies, fans are obviously desperate for news. The entire family has been tight-lipped about the pregnancies, but one Instagram post from Jenner had everyone thinking the pregnancies had *finally* been sort of confirmed.

Jenner posted a pic of nine little pairs of Burt's Bees Baby pajamas and wrote in the caption that she:

Can't wait to cuddle up with the kids!

There was only one small problem that savvy followers picked up on; there were nine pairs of little pajamas. And at the moment, Jenner has six grandchildren. Oldest daughter Kourtney is mom to sons Mason and Reign and daughter Penelope, Kim has daughter North and son Saint, while son Rob Kardashian is the father of baby girl Dream Kardashian. Even allowing for Kim's new baby, that's still two pairs too many.

The momager naturally had a perfectly sound explanation for the extra pajamas. She sat down for an interview with Steve Harvey on Steve on Tuesday to discuss the Kardashian family's holiday family traditions and, of course, that pesky pic of pajamas that has everyone talking. Jenner told Harvey, according to People:

Well, this was a gift. Oprah had these pajamas as one of her favorite things. It's Burt's Bees Baby. They have the most beautiful, organic cotton pajamas. I went on their website and they were all sold out.

Not to be denied one of Oprah's favorite things, Jenner decided to take matters into her own hands, telling Harvey:

I called the company and said, "Come on, don't you guys have a few left?" And that's what they sent.

Well, that all wrapped up rather nicely, didn't it? Burt's Bees Baby, a company getting an insane amount of free press thanks to Jenner, just happened to have exactly nine pairs of pajamas to send to Jenner? Isn't that rather convenient, guys? Isn't it?

I sort of get it, I suppose. Kris Jenner, demonically brilliant businesswoman that she is, is trying to keep fans in suspense and doing a damn good job if it. Her daughters will announce their rumored pregnancies when they're ready, I guess. Us Weekly reported that Khloe is getting ready to make her pregnancy official in the near future. And hopefully Kylie won't be far behind. So Kris has to keep fans on the hook while her daughters make up their minds, right?

But I tell you, if they're not pregnant... I might just lose my mind. And perhaps a little respect for Kris Jenner, though that seems nearly impossible.