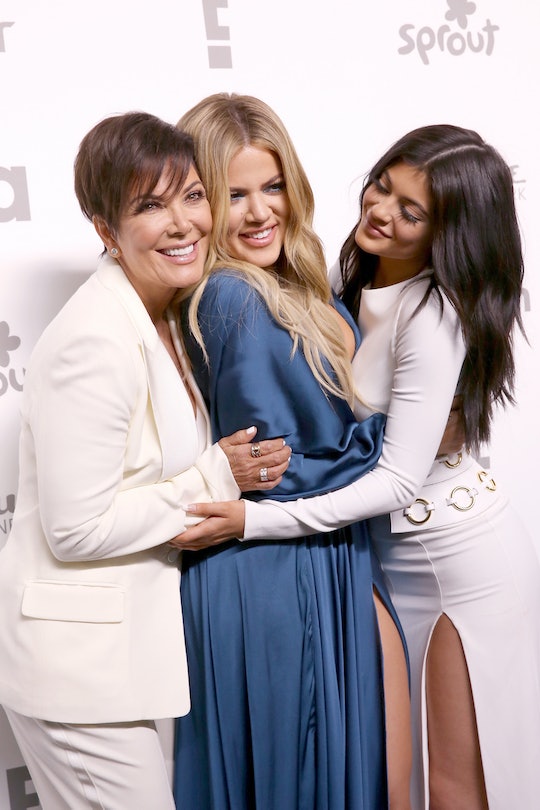 Kris Jenner is known for being not just the mom to five very famous daughters and one kind of famous son, but also for helping them create and run their businesses. She's even trademarked the term "momager," just in case you didn't know how extra she really is. There are some people out there who don't like that Jenner is behind all of her family's fame and reality TV show, but any real fan knows that she's all heart. And Kris Jenner's parenting advice proves that she's a dedicated and loving mom, even if she is cashing a large part of their residual checks from their numerous endeavors.

If anything, Kris Jenner is an icon for being not just a mom of six, very different and opinionated children, but also making sure that every single one of them has done well for themselves, whether they're selling lip kits, raising her gorgeous grandkids, or blogging about their favorite smoothie recipes. It's not always true that a kid's success (or failures) reflects on the parents, but given how often her kid's rave about her, let's give Kris a little credit.

She meddles in her kids' lives, she celebrates them, and she tells them when they're encroaching on her space, as she did with Kim Kardashian when she moved back in after giving birth to North. Kris Jenner is just full of great ideas.

Some people judge Kris for meddling with her kids' business. But she knows she's earned it. The momager said, according to the Daily Mail:

I’ve spent many years of my life being pregnant. And for me to raise them and say goodbye to them when they are 18, just isn’t going to work for me. I’ve managed to have the best family dynamic that I can. My girls have all gone through that stage where they push back on their parents, but it’s all about the family dynamic. That’s why I create these relationships and cherish them.

And You Can Most Definitely Boss Them Around

In the same 2012 interview, according to the Daily Mail, she added that your kids are never too old for discipline. Kris added:

[Most of] my girls are in their 30s, 20s, I mean, they’re not going to take my discipline. I’m sure you’ve all seen the show, where I have no voice. Kendall and Kylie are still under my thumb and live in my house. There’s no option, if you don’t give your kids an option. You are living in my house with my rules.

Always Be The Boss

If you watch Keeping Up With The Kardashians, you know they love a good family meeting. Really, the woman calls them for everything, whether it's about if Kim should do a nude shoot or they have to tell the kids about Caitlyn Jenner's transition. Or when something it up with one of the kids. According to Hollywood Life:

Kris ordered Kim, Kanye, Khloe, Bruce and everyone else to her house for an emergency family meeting to figure out how to best handle this situation. That’s how Kris handles a family crisis’ with a big family meeting.

The More, The Merrier

Kris reportedly gave Kim some advice when she was nervous about having three kids, especially since she wasn't carrying Chicago, the 37-year-old Kardashian daughter was anxious about juggling all the babies. She said, according to Entertainment Tonight:

Teach Siblings To Be There For Each Other

When someone in the Kardashian and Jenner clan is going through a tough time, Kris is always the one to remind them that they have to stick together. Family is always first for Kris, even before selfies.

Try To Have Fun

Kris told Us Weekly that when Kylie Jenner told her she was pregnant, she told her youngest daughter to "Enjoy every second." Yea, that's easier said than done sometimes, but she definitely gives it her best shot.

Admit When You're Wrong

Kris Jenner does a lot of things for her daughters but they aren't always thrilled with her actions. Like when she took Kim's marble or fumbles one of her daughters' many business ventures. But she does always let her kids call her out and apologizes when she's wrong. Which is probably they they're all so close.

Kris has no delusions about how different her family is from everyone else's in the entire world. But she, and her daughters, embrace their quirks instead of hiding them, which is how she originally pitched KUTWK, according to The New York Times.

Don't Let Anyone Make Fun Of Your "Mom Jeans"

Or any other piece of clothing you love. Kris Jenner is unapologetically Kris Jenner at all times. Kids come second to self-care, and she often hits the spa or gets lunch with friends like The Real Housewives Of Beverly Hills' Kyle Richards. Remember, this is the woman who created a music video called, "I Love My Friends," in 1985 when she was a brand new mom. It's important to have an outlet other than your family.

Everyone laughed at Kris when she hired a scribe last season, but anyone with kids knows that it's always good to keep receipts. Kids can be tricky.

As much as it's tempting to judge Kris Jenner for all of the money and fame she's helped her family earn, it comes from a good place. At least, from what we can see on television, right? She always tells her kids how proud she is of them (and tries too hard to fix their problems when she isn't) and has their back like no one else. Who wouldn't want a parent who made that their first line of business every morning? Say what you will about Kris, but she's got this parenting thing down.