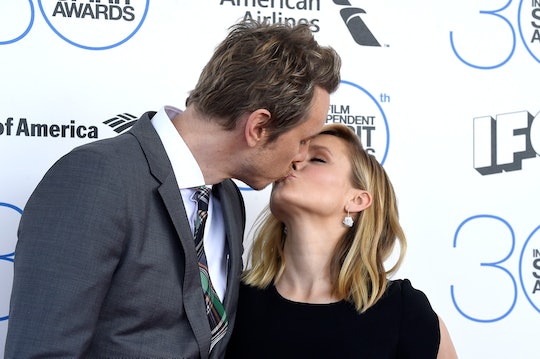 Kristen Bell and Dax Shepard have sort of become the gold standard for happy couples, whether they wanted to or not. As parents and partners, fans often seem to hold them up as an example of what a fun, intimate, honest relationship should look like. But perhaps the thing fans appreciate most about them is their willingness to share their journey with the public. They don't try to look perfect because they're both happy to admit their relationship takes a whole lot of work. In fact, Kristen Bell and Dax Shepard decided to get married after one major compromise that could have potentially torn them apart... but they chose to be in each other's corner.

Bell and Shepard are celebrating 12 years together this year. They initially met in 2007, as they told People in a recent interview, at a dinner party with mutual friends. After the fact the Frozen actress reconnected with the Parenthood actor at a hockey game and apparently the chemistry was all there.

Despite the chemistry, Shepard had his reservations about Bell — specifically her joy. As he told Good Housekeeping in a 2015 interview, "When I met her and her friends, I was suspicious of their unbridled happiness. I thought, 'Something stinks here; they're in a cult.'"

Shepard went on to struggle with commitment in the early days of their relationship despite the fact that he was wild about Bell. They broke up for a few days, as Shepard told People, but got back together when he realized what a catch Bell is. "I was like, ‘That’s the best personality I’ve ever seen on a woman. I need to be around it. I want to be around it when I’m 80, but how?" he told the magazine.

Marriage remained a hurdle for the couple. While Bell wanted to get married, she told People that her now-husband had a "great argument" against marriage, saying: "He has a great argument that the state having a piece of paper doesn’t mean he’s going to be nice to me and by my side for the rest of my life. [Rather], that is going to be evidenced by how we treat each other and the commitment that we make."

So here is where the big compromise comes in. Bell decided she was just going to give up on the idea of marriage in 2009, which was when Shepard proposed because, as he said in that same People interview, "Ultimately, I was like, ‘Well, I’m doing it because my partner wants that. Forget the tradition or history of marriage as a concept, you knowing I was doing something that I didn’t want to do because I loved you was a big sign for you."

They got married in 2013 and are now parents to two daughters, 5-year-old Lincoln and 4-year-old Delta, according to Entertainment Tonight.

Both Shepard and Bell admit they have to work really hard on their relationship that looks so easy to the rest of us. Bell opened up in 2017 about the fact that they have gone through couples therapy, according to HuffPost. But ultimately they seem to want the best for each other, and I think that's saying a lot.