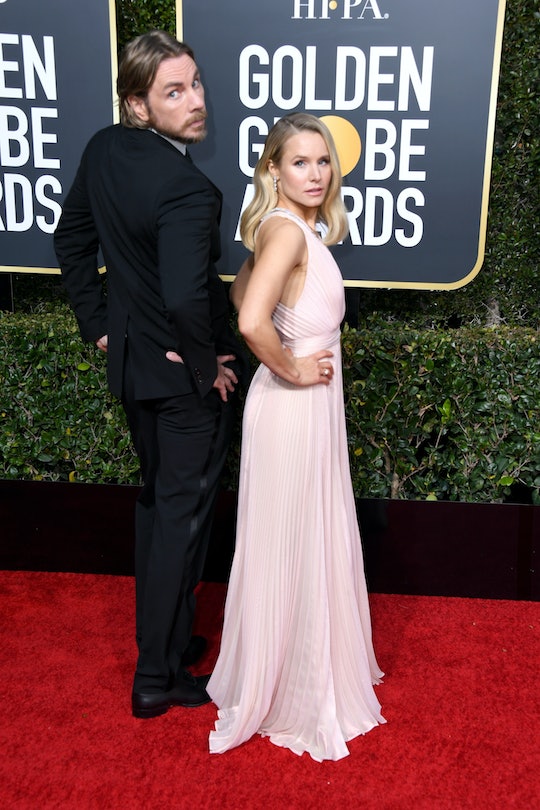 Glitz, glamour, and gowns — that's what most people associate with award shows. Even after the big event is over, the rest of the night is filled with celebrity afterparties that keep with the theme of extravagance, for most people anyway. But Kristen Bell and Dax Shepard's Golden Globes afterparty back at home was a little less champagne and caviar and a little more baked potatoes and butter. The couple is known for marching to the beat of their own drum and Sunday night was no exception.

Bell and Shepard were on site at the Golden Globes after Bell was nominated for Best Performance by an Actress in a Television Series for her role in the NBC hit, The Good Place. Bell turned heads in a beautiful blush gown that HuffPost likened to the robes of a Grecian goddess. She even gave the cameras a little twirl to show the full effect of the dress. And Shepard was right there with her to give the cameras a show of his own, playfully imitating Bell's sassy star stance.

While she didn't end up taking home the award, Bell did get something pretty great out of her night: some alone time with her husband. Any parent can tell you that this kind of peace and quiet, or really any one-on-one time with your partner is a rarity. And believe me when I tell you that Bell and Shepard made the most of their night together.

Following the show, Bell posted to her Instagram Stories showing how she and her husband were spending their evening. Rather than don another fabulous pair of outfits and flock to one of the many afterparties that I'm sure they were invited to, Bell and Shepard retired to their hotel room to eat leftovers and watch some TV.

"Don't worry kids your parents are safe and sound at home eating leftovers and watching 60 minutes," Bell captioned her first after-Globes post to her Story.

Along with his leftovers, Shepard was enjoying an interesting chip and dip combo. "Guys, dad is dipping gluten free crackers in a stick of butter," Bell explained in her IG Story. "GAWD I love this man."

The couple of 11 years shares two children together, according to Heavy. As a mom myself, I know all too well how few and far between quiet moments alone with my husband can be. So, while there were a few afterparties that were likely raging, the night in that Bell and Shepard chose sounds pretty perfect to me.

The started their festivities even earlier than that, though. According to E! News — and Bell and Shepard's own Instagram posts from before the show — they were grubbing out then, too. What better way to get in the celebratory mindset than breakfast in bed?

"I can't remember exactly," Bell captioned an Instagram post from before the Golden Globes. "But I'm pretty sure the rule is to eat as much as humanely possible before squeezing into a formal dress. Right?"

I'm not sure how many other celebs have the same ritual when getting ready, but this technique sounds good to me. Hopefully she saved some room for the ham and cheese sandwiches that Melissa McCarthy was slipping to her friends.

Shepard, too, put in a bit of effort before hitting the Beverly Hills red carpet. "Even showered (last night) for this," he captioned his own post. A nice, uninterrupted, shower, followed by breakfast in bed, getting all dressed up and going out on the town, and retiring to a quiet night in together — Bell and Shepard lived any parents' dream on Sunday, and I am here for it.