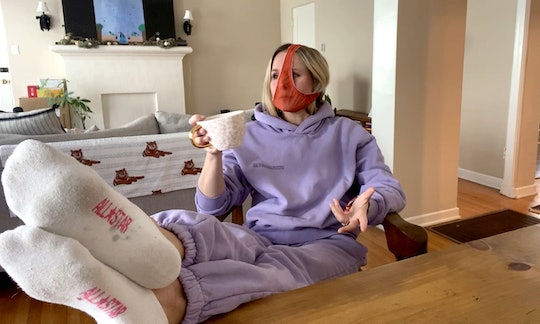 Kristen Bell Hilariously Reveals How Her Daughter Is Rebelling Against Homeschooling

Like parents all around the world right now, Kristen Bell is struggling with homeschooling her daughters during this ongoing time of quarantine. The Bad Moms star is apparently really missing teachers, as she revealed in the first episode of Season 5 of Momsplaining that her little students are proving to be hilariously rebellious.

In the premiere episode of the Ellen digital series, which aired on Wednesday and looks significantly different from past installments due to social distancing guidelines, Bell had a hilarious chat with fellow celeb mom, Ashley Graham. Bell explained that she was not planning to film from her home where she was wearing sweats, but the pandemic had changed things up quite a bit. And like so many other moms around the country, Bell has also been trying to figure out how to deal with her new normal. Her advice? Try sharing a little gratitude for "doctors, nurses, janitors, grocery store workers, pharmacists, delivery employees, teachers."

Teachers got a few extra mentions on her gratitude list now that she is homeschooling her two daughters, 7-year-old Lincoln and 5-year-old Delta, who she shares with her husband Dax Shepard. Because, according to Bell, the "two worst words in the English language" right now are "home" and "schooling." Which should tell you a little about how her experience has been going so far.

Chatting with Graham, who gave birth to her first child back in January and is therefore at a very different stage of parenting, the Good Place star said "doing homeschool" with her daughters is "absolutely miserable."

"When we started the quarantine," Bell said, "the first math sheet I gave my daughter, in all the answer lines she wrote, 'no, no, no, no, no.'"

The actress' daughter Lincoln is rebelling against homeschooling to the point where she actually wrote an opinion essay about her mother as a teacher and Bell did not fare well in the opinion grid. In a photo of a piece of paper Lincoln wrote about "how my mommy reacts to me," you can see that Bell's daughter included reactions like "stern voice, no patience, doesn't believe me."

All in all, Lincoln felt her mother was giving her "bad reactions."

No wonder Bell is feeling especially grateful for teachers after that kind of poor performance review. "For real, this has not been easy," Bell admitted in the latest installment of Momsplaining, but added an encouraging note to fellow parents: "But know that this is not forever, it will pass."

You can catch new episodes of Momsplaining on EllenTube every Wednesday.