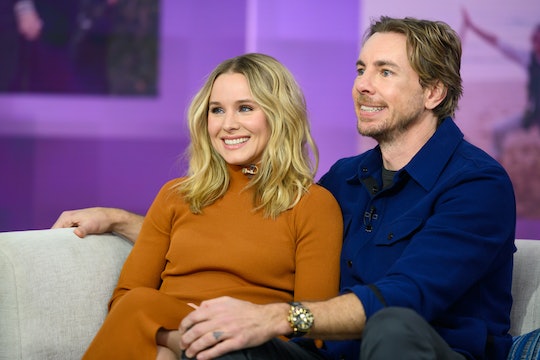 Kids and motorcycles? That can be a scary combination for many parents. But Dax Shepard and Kristen Bell have introduced their daughters to the motorcycle world now to address any fears and safety concerns head-on. Even though their girls still quite little, their reasoning behind letting them get on the back of a bike is totally valid when you think about it.

The Frozen 2 star recently filmed an interview with Saturday Night Live alumni Kevin Nealon on his YouTube series, Hiking With Kevin. The pair discussed a variety of topics, including the fact that Bell's husband really likes to ride motorcycles. Nealon asked Bell if this was something she found herself worrying about and she immediately said, "No." She went on to explain that she simply wasn't in the business of trying to change her husband because "if you go in trying to change someone you're going to lose," and that Shepard has apparently been riding motorcycles since he was 3 years old.

Then, as so often happens with Bell (and so many other parents if we're being honest), the conversation turned to her two little girls, 6-year-old Lincoln and 4-year-old Delta.

It seems that she and Shepard are already teaching their daughters about riding motorcycles. Why? Because they want their girls to be well informed and well prepared when they hit their teens.

"[Dax] said to me, ‘I want you to know why I’m doing this because when she’s 16 and she’s got a boyfriend who rides a motorcycle, there is not a girl who rides well in the world that would get on the back of a boyfriend’s motorcycle," Bell explained. "If she rides, she’s gonna want to either ride her own or he’s gonna be on the back."

Bell shared that that Shepard wants to be the one to train his daughters how to ride a motorcycle, rather than a potential 16-year-old down the road who might have just gotten their driver's license themselves. "That way we know she's in charge and not at the whim" of someone else, Bell said.

Back in 2017, Bell and Shepard explained in an interview with E! News that Lincoln and Delta were already taking "rides around the driveway" on the back of their dad's motorcycle. They couldn't go further since they were both under 5 and not legally allowed on the road, but Shepard wanted them to get accustomed to motorcycles early.

Not every family out there will want their kids to learn how to ride a motorcycle, of course. But if they are going to be a part of your family's life like Bell's, perhaps it's not the worst idea to teach safety at a young age. Knowledge is power, after all.