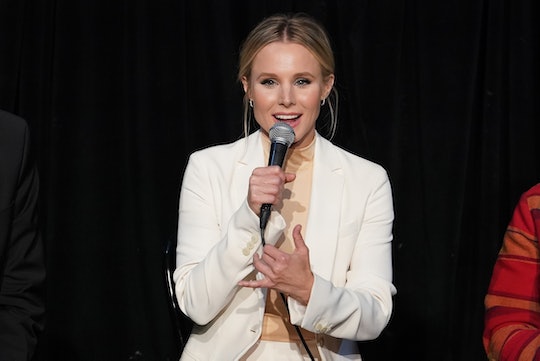 Awww! Kristen Bell Is Making 'Veronica Mars' For Her Daughters

So who's excited for the new Veronica Mars reboot? I will answer that question for you; anyone who watched the original 2004 series starring Kristen Bell as the eponymous popular girl-turned-sleuth who was charming and original and unique. The original series ran for three years and I think we can all agree that was not nearly long enough. I know one person who would agree, Veronica Mars herself. In fact, Kristen Bell made the Veronica Mars reboot specifically for two girls who weren't alive to see it the first time around: her daughters. Because she thinks role models are important, and little girls could have worse role models than Veronica Mars.

Bell is the mother of two little girls, 6-year-old Lincoln and 4-year-old Delta, with husband Dax Shepard. The Good Place actress has been incredibly busy in recent months filming Veronica Mars, which will be released on Hulu on Friday, July 26, and she opened up to Access Hollywood about that push-pull thing so many working mothers go through. When you are working on something you feel passionate about but it takes you away from the little people who mean the most to you. As she told the news outlet, "This is a giant show to shoot. I’m here a lot of hours, which means, logistically, I’m away from my kids more hours. And missing four or five bedtimes a week."

As Bell went on to explain, she sees real value in what she's creating with the newVeronica Mars, particularly for her little girls, according to People:

When I decided to take it on I was like, you know what, now that I went back and reread the scripts and watched the show, I want my girls to have this character in their life.

Bell went on to note in The New York Times that the character of Veronica Mars is very much her own person. A formerly popular high school girl with the cool boyfriend and a pile of friends who becomes an assistant to a local detective in the fictional city of Neptune, California, Veronica is nobody's stereotype. And that's what Bell considers important, as she told Access Hollywood:

Now I see why a lot of young girls and women said, thank you for doing that show. It wasn’t just because we entertained them, it was because she was a force in their life. She was an example.

Resurrecting this character, who fans last saw in a 2014 film that Bell and Veronica Mars creator Rob Thomas funded through a Kickstarter program, was so important to Bell that she weighed the sacrifices she had to make as a mom, as per Her.ie:

I made the choice as a mom, now — which was really hard — to go, ‘I’m gonna miss a couple bedtimes for a couple months, because I want this character to exist in the world.’ I want her to be a zeitgeist. I want girls to reference her, I want girls to feel like her.

Kristen Bell might have had to make a difficult choice, but she's also in a pretty enviable position. To be able to create a character that will have a lasting effect, not just on her own daughters but for generations to come, is pretty amazing.

And no less than we would expect from Veronica Mars herself.