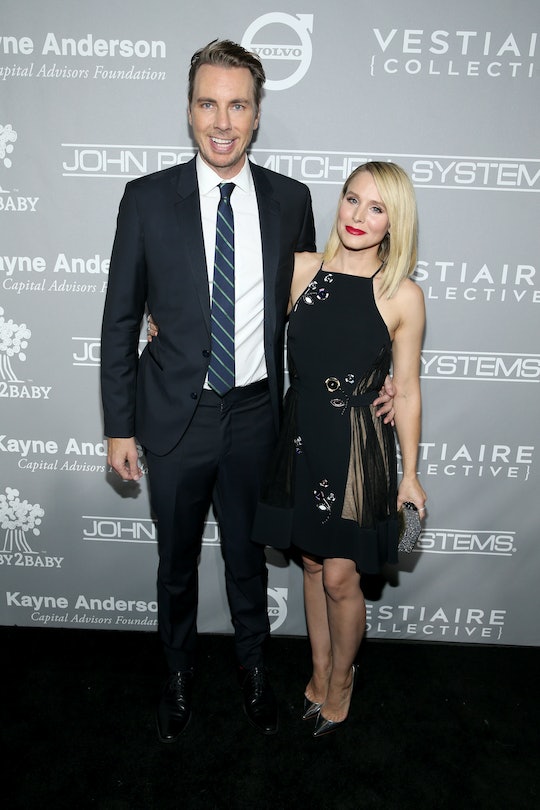 Kristen Bell is known for waxing poetic about Dax Shepard on social media — but her recent post is one of her most emotional yet. In celebration of her husband's 14th sobriety birthday, Kristen Bell praised Dax Shepard for teaching their daughters about adventure, for publicly sharing his struggles with addiction, and for just being an excellent human.

On Saturday night, Bell shared a carousel of 10 photos to Instagram alongside a lengthy caption dedicated to Shepard. "To the man [who] mocked m in our wedding photos because I cried too many tears of joy," she began the post, "Who wore a baby Bjorn for 2 straight years to show his girls how to be as adventurous as possible, Who held our dear little shakey mann pup for 8 hrs straight on the day we had to put him down, I know how much you loved using."

She continued by expressing admiration for her husband for working hard to get past his addictions. "I know how much it got in your way. And I know, because I saw, how hard you worked to live without it," she wrote. "I will forever be in awe of your dedication, and the level of fierce moral inventory you perform on yourself, like an emotional surgery, every single night."

In addition to a photo from their wedding, Bell filled the album with pictures of Shepard and their children (the kids' faces are covered with stickers to protect their privacy). As Bell promised in her caption, the second photo shows Shepard carrying one of his daughters in a Baby Bjorn while he plays mini golf. Photos show a variety of other daddy-daughter adventures — Shepard proudly shows off his kiddos in what looks like a desert, next to a lake, in New York City, at the beach, and more.

Bell continued her post by pointing out some of Shepard's best qualities, writing:

You never fail to make amends, or say sorry when its needed. You are always available to guide me, and all of our friends, with open ears and tough love when its needed most. You have become the fertilizer in the garden of our life, encouraging everyone to grow. I'm so proud that you have never been ashamed of your story, but instead shared it widely, with the hope it might inspire someone else to become the best version of themselves.

And not only has Shepard inspired many fans, but he's also inspired his wife. "You have certainly inspired me to do so," Bell added, meaning that Shepard has inspired her to become the best version of herself. "I love you more than I ever thought I could love anyone, and I want you to know, I see you. I see how hard you work. You set an excellent example of being human. Happy 14th year sobriety birthday, @daxshepard. Xoxo."

Shepard has opened up about his past addictions on many occasions. "I just loved to get f—ed-up — drinking, cocaine, opiates, marijuana, diet pills, pain pills, everything. Mostly my love was Jack Daniel's and cocaine," Shepard said in a 2012 Playboy interview, Us Weekly reported. "I lived for going down the rabbit hole of meeting weird people. Of course, come Monday I would be tallying up all the different situations, and each one was progressively more dangerous. I got lucky in that I didn’t go to jail."

It's clear that Shepard is constantly working hard to maintain his sobriety, and there's no doubt that Bell's support keeps him motivated — not to mention, she gets him pretty kickass presents on his sobriety birthdays. On Saturday, Shepard Instagrammed a photo of Bell and their friend Monica Padman (both pictured in fabulous hairnet/helmet combos) at the King's Hawaiian food factory. "Best sober birthday present ever. @kristenanniebell got me a tour of the @kingshawaiian factory and I ate 8 STRAIGHT oughta the oven," Shepard captioned the shot, adding:

2 more upstairs, and 3 at home. 13 all-in for one day is an accomplishment I will not soon forget. Also, the fact that Kristen looks like a scientist and @mlpadman looks like she's on a kindergarten field trip just makes my heart swell to dangerous levels. Thanks Ladies!

I don't care if Chrissy Teigen thinks the phrase is overused: Kristen Bell and Dax Shepard are total relationship goals.