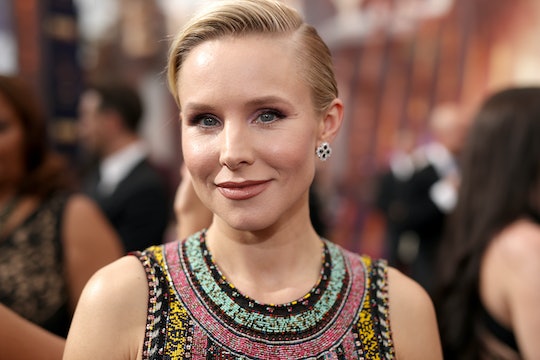 Kristen Bell Says 5-Year-Old Daughter Is Still In Diapers: "Every Kid Is Different"

Say it with me now: Every kid is different. Some kids are great at potty training while others just don't care for it. Like, at all. And there's no shame in that, so be like Kristen Bell who recently shared that her 5-year-old daughter is "still in diapers" and opened a discussion about the trials and tribulations of raising kids who are so very different from each other.

During a recent episode of her web series Momsplaining, Bell — who shares two daughters, 7-year-old Lincoln and 5-year-old Delta, with her husband Dax Shepard — sat down with actresses Maya Rudolph and Casey Wilson to chat about parenting. Or more specifically, how different her experience has been when it comes to toilet training her two children. Bell explained that she and her husband were lulled into a false sense of security with their oldest daughter in that regard.

"My oldest daughter, at 21 months, we merely suggested that she use the toilet in the other room and never wore another diaper beyond that," Bell said, adding that she and Shepard were baffled by all of the talk from other parents about how much they struggled with the transition from diaper to toilet. "We were lying in bed giggling about this, my husband and I, like, 'Why does everyone make a big deal out of this potty training? It's so easy. Just tell the kid to use the toilet,'" she recalled to Rudolph and Wilson

When it came to her youngest daughter? According to Bell, "Currently, my youngest is 5½; still in diapers."

There really doesn't appear to be any rhyme or reason to potty training; according to the Mayo Clinic, some kids might seem ready to move on from diapers as early as 18 months while others are still struggling after 3 years old. As Rudolph chimed in after Bell's admission, "It's real relative isn't it?" Bell responded, "Every kid is different," and that is the truest thing of all.

The Good Place actress is raising her daughters to be their own people and speak their minds no matter what. "I am raising women who are not afraid to disagree," she wrote on Instagram on May 10. "Not for disagreements sake, but rather to use their voice when they need to." Encouraging kids to be their own individual selves means parents won't always know what to expect from them, as Bell discovered during toilet training. But it's a small price to pay to send some strong-minded women out into the world.