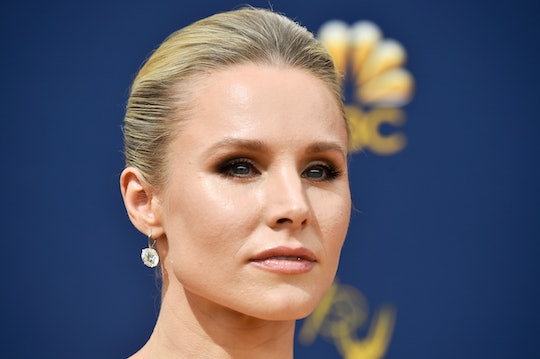 Kristen Bell is one of those people I sometimes want to dislike just because she's so likable. I know, it's a vicious merry-go-round. The Good Place star manages to come across, to me anyhow, as real without trying to be sort of falsely real in that social media way I found incredibly grating. I feel like she's telling us the truth because that's how she is, not because she wants more Instagram followers or whatever. And her most recent real mom revelation might not be what everyone wants to hear anyhow. Kristen Bell says she smokes weed on the regular, and of course there are already parents who are worried about her kids because of it.

Bell is married to CHIPS star Dax Shepard and is mom to two little girls, 4-year-old Lincoln and 3-year-old Delta Blue. She has made almost a second career out of being super honest about her life, whether she's discussing her struggles with depression or her inventive parenting tricks or her husband's 14-year-long journey with sobriety. And speaking of sobriety... the Veronica Mars actress is in no rush to jump aboard that particular train any time soon. As she told Marc Maron in a recent interview on his WTF podcast, this mom likes to enjoy a little vaping with her television watching every now and then.

As Bell explained to Maron, she likes to unwind with a little 60 Minutes and some weed every once in awhile if she's had a tough day, according to Us Weekly.

I like my Vape pen quite a bit. Weed rules. Weed is my drug of choice, for sure.

She went on to clarify that she doesn't smoke weed around her kids (so everyone just calm down):

I can’t do it around my kids, which is a phenomenal amount of hours each week. Once a week, if I’m just exhausted and we’re about to sit down and watch 60 Minutes, why not?

Can I just go ahead and say this sounds like a super chill night to me?

So, how did the Frozen actress first try weed, you ask? In probably the most typical way you can possible imagine... she was at a Dave Matthews concert and someone offered her some. I guarantee you it was a white guy in Birkenstocks and dreadlocks wearing one of those hemp caftan things and cargo shorts. This visual might make me happy, but there are some people who are just oh-so-terribly concerned for the welfare of Bell's children now that they know she smokes weed. Especially since Shepard is a recovering addict.

So here's the thing; mom wine culture is alive and well and celebrated all over this great land of ours. How many memes have been generated about it being "wine o'clock" or whatever and it's perfectly natural? I totally support this, by the way, but I guess I just don't see the difference between vaping a little weed when the kids are in bed and having a glass of white wine the same way. Some people, and I'm not naming names here, might even occasionally do both. As to the issue of Bell vaping with Shepard in the room, she answered that issue rather deftly herself, according to E! News, by saying her husband understands "he lost his privilege with them because he can't handle it; his brain doesn't have the chemistry to handle it."

I think it's important for moms like Kristen Bell to admit they smoke a little weed now and then. It's another step to dispelling that myth that a mother becomes this serviceable caricature of a human once she has children. No, I don't actually think you should smoke weed around your kids. But it sounds to me like Bell is pretty responsible about the whole thing. So let's give it a rest with the judging, shall we?