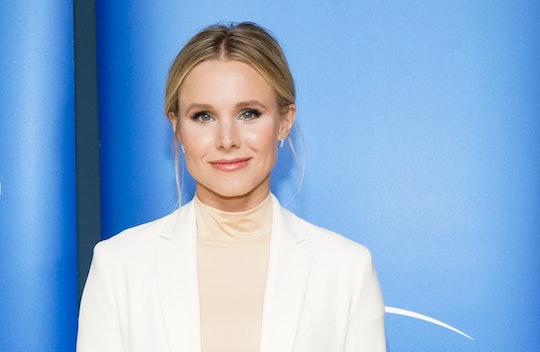 I don't want to tell Kristen Bell how to parent, of course, perhaps because she sort of seems like she has it figured out (also because we don't know each other) but I need to advise her on this one thing: There are some questions you never ask your kids. I can tell you this as a mother of four who was indelibly scarred after asking my sons once if they thought I was pretty. I will never tell you the answers... they weren't good. So when Kristen Bell shared a video of her daughters Delta and Lincoln taking some truly wild guesses about her age after she asked them how old she was turning for her birthday, I felt for her. But also she asked, so I guess this is what happens when you open up that particular can of worms.

The Good Place actress sat down with her family — 4-year-old daughter Delta and 6-year-old daughter Lincoln plus her husband Dax Shepard — to discuss her birthday, which happens to be today, July 18. I don't mean the four of them sat around trying to figure out what sort of cake she might want for her celebration or anything like that. As Bell shared in an Instagram video on Wednesday night, she rashly decided to ask her two daughters how old she was turning for her birthday. And their answers.... yeah.

In the video, Bell asks her daughters, who we don't see because both Bell and Shepard are very careful about protecting their daughters' privacy, "How old do you think I'm turning?"

Delta speaks out first, after mulling her way through the 60s and 50s. "63," she says. Then Bell, who is apparently a real glutton for punishment, turns to her other daughter and says, "How old do you think I'm turning Linc?" She should have stopped at Delta... In the video, Lincoln says, "89?"

Laughing (because what else can you do) the Veronica Mars actress turns to her husband and asks him how old he thinks she's turning. "I would say it's a safe bet somewhere in the middle of those two guesses, so 71."

For the record, the correct answer was 39. Bell captioned the post, "My kids are kind, I don't care if they can't do math. (For my #armcherries: #fastmath is overrated).

Bell is obviously comfortable enough in her own skin that she can shrug off these wildly incorrect guesses about her age. Perhaps because she has so many other good things going on in her life right now.

Beyond spending time with her family, which I'm fairly certain is pretty sweet for the most part, the actress is getting ready to return to Neptune, California as the cult-classic young detective Veronica Mars on July 26 on Hulu, according to TV Guide. She has a solid social media presence as an influencer, and from her Instagram feed alone I think it's safe to say she's got a pretty solid work/life balance figured out for herself.

So what if her children think she's decades older than she actually might be? She can handle it. And like she noted in her IG post, are they even that good at math yet?