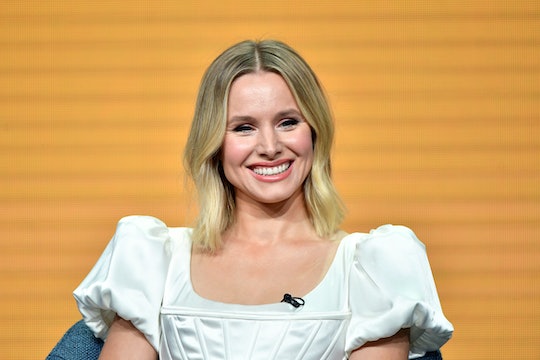 "First emergency room visit," Bell wrote in an Instagram post featuring a picture of her and one of her daughters, whose face is hidden by an emoji sticker, in the emergency room. "One hairline fracture and a finger smushed so hard in the door it popped like a jelly donut."

Uh, ouch. The Good Place star went on to thank Children's Hospital Los Angeles and the staff that assisted them there for the "amazing care" and treatment they received. "Did you know that when you enter the emergency room at @childrensla you immediately get a 'Child Life Specialist' trained to make sure your child knows what happening?" Bell wrote. "And to make sure you understand all of what's happening and your choices? It made us feel so safe."

As Bell shared on Instagram, the hospital also follows up with patients to ensure any additional questions or issues get handled. "[Children's Hospital Los Angeles] follows up the next day with a phone call to make sure all is well after the trauma," she wrote. "Excellent care all around. Thank you to all who helped my baby."

Although part of her daughter's hand is visible in the photograph Bell shared on Instagram, the mom of two noted she wouldn't be sharing a closeup of the injured finger as "there was literally burger popping out all over and it as pretty gross." And while I won't be eating a burger anytime soon thanks to Bell's candid description, I appreciate her keeping the gruesome reality of her daughter's injury to herself.

On Instagram, a number of parents sympathized with Bell over her daughter's recent ER trip. Fellow actor and mom of three, Zoe Saldana, commented that Bell's story was her "worst nightmare," but thanked her for sharing info about the child life specialists at Children's Hospital Los Angeles.

Actor, singer-songwriter and mom of two, Caitlin Crosby commented that her family had been to Children's Hospital Los Angeles four times so far and "loved them too."

While Bell noted this was one of her daughter's first trips to the emergency room, the family had a close call earlier this summer. In June, Bell revealed through her Instagram Stories that her youngest had managed to get something lodged in her nose.

“Right before this photo was taken my youngest daughter shoved a jewel up her nose up to her brain and we jumped in the car headed to the emergency room," Bell wrote at the time, according to Us Weekly. Of course, kids can be unpredictable and just when Bell thought the family would be spending the evening in the emergency room, her daughter saved them a trip. "On the way she snorted it out and we re-routed and went to @nbcthegoodplace #FYC panel instead," Bell wrote before sharing photographs of herself dressed for the panel.

Bell has two children, daughters Lincoln and Delta with husband Dax Shepard, and while the couple typically refrains from sharing their daughters' faces in an effort to protect their privacy, they've shared a few of their kids' hilarious antics with fans. Such as when they hilariously guessed Bell was 63 and 89 years old. For the record, Bell was only celebrating her 39th birthday at the time.

While no parent enjoys having to rush their child to the emergency room, at least Bell found a helpful staff there to treat her daughter's injury.