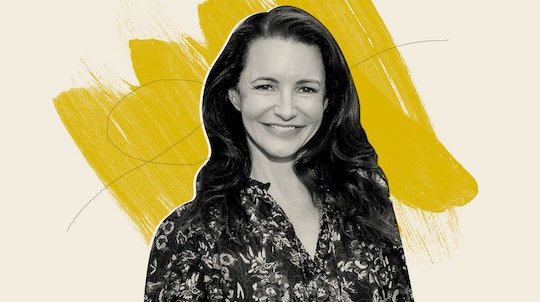 Kristin Davis On Single Motherhood, Dating Over 40, & Learning To Trust Her Instincts

The kids are playing nicely, but Sex and the City star Kristin Davis stuffs a mattress cover against the gap at the bottom of her office door to muffle the sounds of her children just in case. She fully expects her toddler to interrupt the interview. “He will be like, ‘What is she doing in there and why can’t I see her?’” she tells Romper.

Davis is a single mom to her kids, 2-year-old Wilson and his 8-year-old sister Gemma, both of whom she adopted. The star, 55, is also the host of the now-streaming Fox reality show, Labor of Love, which debuted in May. The series takes the anxious energy of pandemic shut-ins keen to get on with their lives and applies it to a Bachelorette-type setup with a twist. Kristy Katzmann, a single 41-year-old woman looking to start a family with her frozen eggs, meets 15 potential suitors. With Davis as the host, they run the men through a series of drills designed to suss out if they will be good fathers or not. From sperm count tests to labor pain simulations, no topic is taboo. A fake, surprise bear attack aims to show how the would-be dads might respond and protect their family in a crisis. In another challenge, piped-in baby screams pierce the night as they stumble around in the dark looking for the source of the crying.

We really wanted to modernize the idea of parenting and bring to life what women 40 and up go through.

Davis knows the challenges of the show can’t match actual parenting, and jokes that the lawyers at Fox couldn’t allow her to actually use real, live kids to test the men’s parenting acumen. But aside from the antics, Davis sees the show as having a deeper purpose. “We really wanted to modernize the idea of parenting and bring to life what women 40 and up go through in terms of trying to date when they in fact would like to be a mother,” she says. “We just wanted to expand the conversation. You might have those conversations with your friends, but there isn't community conversation about it because usually everyone is already coupled up.”

Davis, a single mom who felt called to adoption, talked about her path to motherhood with Katzmann, who Davis notes is open to becoming a mother with or without a partner. (In a July interview with People timed to the show's finale, Katzmann opened up about her interest in undergoing in vitro fertilization on her own.) The show is not about needing a partner to parent, but desiring one. “Of course for me adoption was my answer, but that wasn’t necessarily the top of Kristy’s list [during the show],” Davis says.

Of course, all parenting is a drill, something Davis understands as she works through her children's own needs, one of whom experiences eczema. Eczema might seem to some to be just a rash, but when it is severe, it can cause infections, inflammation, sleep disturbance, and invade every aspect of everyday life. “I would be at the playground with other moms talking about my child having this rash, and get answers from which cream to use, to scrub it off with a loofah,” she says. After diving down an internet rabbit hole poring over treatments, risks, and so on, she felt even more panicked. Finally, she walked into an adult dermatologist, carrying her child past signs for Botox injections, to get some answers.

As a mom, I wish I had been more trusting of my own instincts.

Davis eventually learned about Dupixent, a medication that treats uncontrolled moderate-to-severe eczema that was recently approved for patients aged 6 years old and older. (Davis partnered with Dr. Lawrence Eichenfield, M.D., chief of pediatric and adolescent dermatology at Rady Children's Hospital in San Diego, to get the word out about the treatment.) Though her child’s condition is currently managed, she thinks it can be a good option for families affected like hers.

But Davis also understands exactly what it's like to feel hopeless — and clueless — about your kids' medical issues, and empathizes with parents going through something similar. “I was trying to be super green and eco, and everything was clean, and our diet... everything... and I thought ‘Golly gee, what am I going to do?’” she says.

Moms doubt themselves so much — and that doubt can feel even more amplified for single moms, Davis says. “On the positive side, I don’t have to worry about my relationship, because I don’t have one," she says. "But on the other hand, I don’t have a support for myself. I remember wishing I had someone to bounce ideas off of. Instead I would be by myself trying to figure it out with Google.”

“In parenting there are just so many unknowns," she adds. "But you figure it out. As a mom, I wish I had been more trusting of my own instincts.”