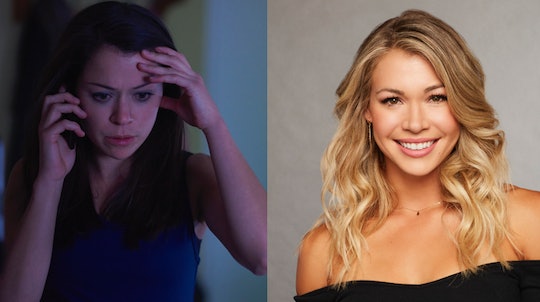 Krystal From 'The Bachelor' Looks Exactly Like This 'Orphan Black' Character

If you've been watching The Bachelor you may have noticed that this season's "villain," Krystal, has been drawing lots of pop cultural comparisons, but there's one that may just be slightly more dead on than the rest. Krystal from The Bachelor looks just like an Orphan Black character and it will get your brain buzzing with conspiracy theories left and right. The two are basically clones of each other. Maybe literally? (Orphan Black was all about cloning, after all!) It's 2018, who knows at this point anymore.

If you've ever watched Orphan Black then you'll be familiar with the show's main actor, Tatiana Maslany's, incredible ability to play dozens of different characters at once, each with distinct personalities and styles so that each is immediately identifiable, though they all have the same face. So I'm not saying that Krystal looks like Maslany the actor as much as she looks like a certain character on the show played by Maslany (ironically the character is also named Krystal). Or maybe Krystal does look like Maslany after all. Or at least Maslany could go as Krystal from The Bachelor for Halloween and I would think it was Krystal from Orphan Black. I know this is confusing, I think we're all confused at this point, but just see for yourself:

On the show Orphan Black, Krystal is one of hundreds of Leda Clones, all part of the same illegal experiment, and who all have Maslany's face. The clones are all raised not to be self-aware, and have no idea that they're clones at all. Some of the clones have figured out the truth and gotten together to form the "Clone Club," but Krystal is not one of these clones. She's still trying to figure things out, at least at the beginning. On the show she's a former manicurist who cares deeply about her personal appearance and Cross Fit and refers to herself as a "10."

On The Bachelor, Krystal is a fitness coach who has made enemies of the other women in the house by complaining that she never has female friends because they're jealous of her, saying how insecure and jealous the other women are, by talking down to them and making near constant patronizing speeches. She also tends to steal Arie away for herself and take important time away from the other women.

So obviously the two women are entirely different people (I mean, one of them is, after all, fictional) but it's hard to deny the uncanny resemblance. More than just the facial features and soft blond waves, there is something in both women's tone of voice and general attitude that is impossible not to notice. Of course, Krystal on Orphan Black has grown to be sympathetic in a way that Krystal on The Bachelor simply has not. As time goes on Krystal on The Bachelor grows more insufferable while Krystal on Orphan Black became a fan-favorite character than everybody rooted for on the show. So the resemblance isn't total, but it's pretty darn close. Even down to how the two spell their name.

Now, I'm not saying that Krystal from The Bachelor is part of a secret experiment to create clones, but I'm also not not saying that either. I mean there are all kinds of things that happen that we don't know about, right? In any case, I wish you luck seeing anything but Orphan Black for the rest of this season of The Bachelor. At least until Krystal goes home, which may end up being a lot sooner than she thinks.