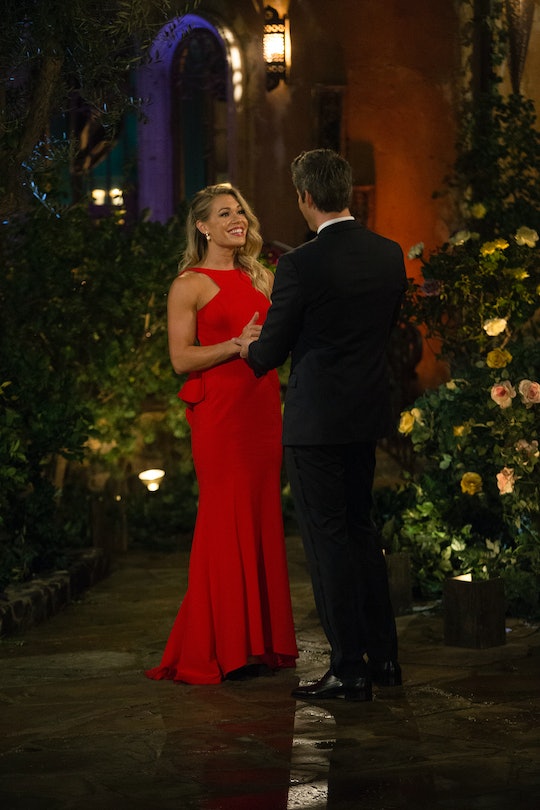 Sometimes it’s easy to forget that what The Bachelor isn’t some fictional Disney love story, complete with a Prince Charming, beautiful woman, and villainous creature standing in their way. The Bachelor is made up of real people — though some of them aren't particularly well liked. I'm referring, of course, to Krystal, who is none too popular in the mansion. So is Krystal The Bachelor villain of Arie's season? She has one clear goal in mind, which is to end up as the woman that Arie proposes to at the end, and really, isn’t that the whole point?

Of course, there has to be a certain amount of drama throughout each season. However, sometimes this is due to some cleverly edited segments that make one specific contestant look bad. It's this one person who makes the others band together in their dislike of her, and the same goes for fans. Unfortunately, it’s the edit that Krystal has gotten, but what viewers have to remember is that we don’t see everything on TV. The episodes are edited tragically to help heighten the drama, so naturally, not everything is always as it seems.

While I'm sure that Krystal's argument with fellow contestant Bibiana Julian was mostly accurate, it’s also hard to dislike her when you think about the reason for her actions.

Krystal feels a real connection with Arie, as many of the other women likely do at this stage. She was also treated to a special one-on-one date that included meeting his family and going through home videos from his childhood. So of course she would feel closer to him than some of the other women who haven't yet had one-on-one dates with him. Does that make it OK for her to interrupt their conversations with him during cocktail hours? No, and that's definitely how you make enemies on this show, but it also explains her apparent connection to him and the need to want to make sure that, after days of not seeing each other, it’s still there.

Krystal came on the show to find love, like everyone else, and although sometimes contestants also find lasting friendships with each other, that just wasn't her goal. Because of this villain status that’s been bestowed upon her, Krystal’s received a lot of backlash on social media and that’s when you have to remember that she’s a real person, in real life, with actual feelings, despite anything you might see on The Bachelor, whether she’s the season’s villain or not.

In fact, recently Krystal took to Instagram to write about the online bullying that she’s endured because of how viewers have seen her this season. "Reading the comments on my posts over the past few weeks has been eye opening to say the least," she wrote under a photo of herself holding a hand up with the hashtag #NotMe, in reference to an anti-bullying movement. "The negativity and cruel words about my character and my appearance is something that I’ve never dealt with, especially not on a public platform. I let it get to me and I let it affect my sleep, my relationships with others and my passion for doing the work that I love." She also added she's "learning to take the good with the bad and becoming stronger as a result" and gave a shout out to fellow former Bachelor contestant Olivia Caridi for her support throughout the whole process so far.

I’m not saying that everyone has to agree with Krystal’s actions or decisions so far this season, but if it wasn't her, it would have been someone else. There’s always going to be a Bachelor villain, but at the end of the day, they’re also a real people who has to live their lives once the cameras stop rolling.