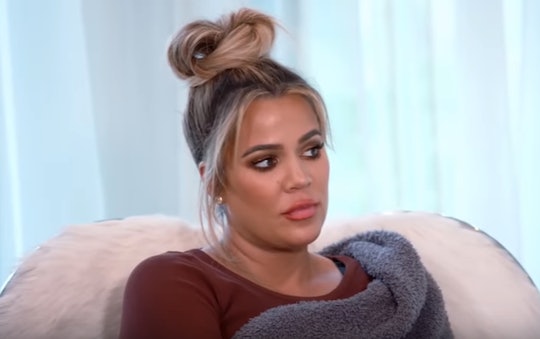 Keeping Up With The Kardashians is only on the second episode of Season 15, and of course it's already the most gripping thing everyone is watching right now. Because of all the pregnancies that were kept something of a secret on last season, of course, but also because the three oldest sisters, Khloé, Kim, and Kourtney, have been duking it out. And no one fights like the Kardashian sisters. It's mesmerizing. Especially this season, to be honest. In the most recent episode, KUWTK fans loved that pregnant Khloé kept eating during an argument. It's become something of a mood.

As we all know now, Khloé is a new mom to baby girl True Thompson with boyfriend, Cleveland Cavaliers' player Tristan Thompson. But when the family was filming season 15 of KUWTK, she was still in the delicious throes of her pregnancy. And I do mean delicious. The Revenge Body host takes a lot of pride in making healthy lifestyle choices, but that doesn't mean she isn't going to let loose and indulge a little every now and again. Especially while she's pregnant.

At the beginning of the episode, momager Kris Jenner was trying to coax her daughter to eat and take it easy during her pregnancy, which Khloé adamantly resisted. She kept to her schedule of working out and eating sensibly. Even calling her poor mom a "psychopath" for having that "old-school mentality" when it comes to pregnancy weight gain, according to E! News.

Things changed, however, when Khloé and her sisters got into a big argument, with her and Kim trying to break through to Kourtney about her recent attitude issues. And then she was just a girl, leaning against a wall slowly eating whatever she could get her hands on with her perfectly manicured nails, wishing the argument would end. As her sister Kourtney cried her eyes out in front of her.

I mean, it might seem harsh but let's face it; fans totally loved it.

Even Khloé herself couldn't help getting a laugh out of her unconscious eating during a pretty serious argument. She shared a tweet about the moment and wrote:

Lol in the moment I didn’t think twice about it. But watching it back it’s hysterical lol pregnant girl issues

To be fair here, there's such a thing as stress eating and the mood between the three sisters was super stressful, even just watching it from my sofa. Kim and Khloé were trying to break through and get an open dialogue going with Kourtney, who clearly seemed to be going through some things of her own and was basically just checking out of their conversation. The three women eventually agreed to see a therapist together, but it didn't exactly solve everything in a heart beat, of course.

Plus, Khloé and Scott Disick were also in the midst of pulling off a hilarious Seinfeld-inspired art prank on Kris Jenner to get back at her for being something of an art snob, according to Entertainment Tonight. So the girl really needed to keep her energy up. Between the fighting and the pranking and trying to grow this adorable little human, no wonder Khloé needed some snacking.

It's always been something of a hallmark of KUWTK, to see the whole family pretty much always eating (although it's often giant salads). But to see pregnant Khloé eating through a big crisis brings a whole lot of people joy. Why? Because who doesn't love food? Who doesn't turn to snacking during stressful situations?

If there's someone out there who can't relate to Khloé diving into a Chinese takeout box while she and her sisters were fighting, I probably don't want to know them.