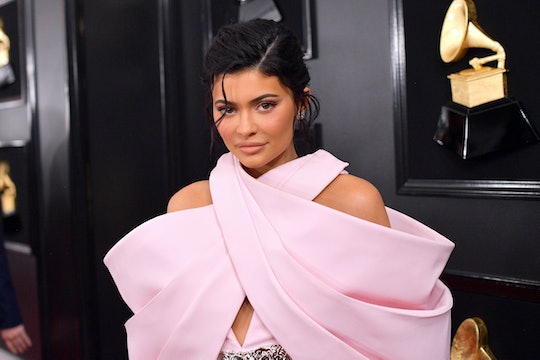 Whether or not you're personally a fan, this reality star and mom sure interests people, judging by all the news headlines she generates. She's been called a lot of things... daughter, sister, heiress, and, most recently, the youngest self-made billionaire in history. But in a new interview, Kylie Jenner addresses her "self-made" label, admitting that, like everyone, she had help along the way.

As Page Six reported, Jenner gave a new interview to the New York Times in which she acknowledged that, while she has a pretty accomplished resume for someone her age, she didn't become a successful entrepreneur out of absolutely nowhere.

"I can’t say I’ve done it by myself," Jenner told the newspaper, clearly in reference to recent Forbes coverage that crowned her the "youngest self-made billionaire" ever due to massive and quick rise of her Kylie Cosmetics brand.

In March, the magazine noted that the the company, which Jenner started when she was just a teen, was valued at $900 million and counting, putting Jenner on track to beat even young moguls such as Mark Zuckerberg in the race to become a billionaire in their 20s.

(The publication recently clarified Jenner did, in fact, hit the mark with recent sales, including an agreement to sell at retail beauty giant Ulta, as CNBC detailed.)

Not to take away from Jenner's accomplishment in coming up with an idea that no one else had done in precisely the same way before — to sell a matching lip gloss and liner kit using only social media — but some onlookers questioned the title "self-made" due to the fact that Jenner had, at the time, a family with ample funds and fame, plus the help of Kris, a self-described "momager" with killer business sense who assists her offspring with deals.

(In fact, the new Times coverage noted that Kris Jenner was the one to help Kylie get her company's trademark.)

"If they’re just talking finances, technically, yes, I don’t have any inherited money," Jenner clarified to the Times. "But I have had a lot of help and a huge platform."

So everyone who got a little testy over this issue before can now relax, okay? Jenner, mom to Stormi, 1, is being honest about the fact that her ultra-famous family and fame as a result of being part of E!’s Keeping Up With the Kardashians has certainly assisted the rise of her makeup line.

Still, though, it's not like she sat around peeling grapes while someone did her work for her. Jenner runs a staff and oversees everything from the brand's packaging to social media, where she has a major following, as her first Forbes interview detailed. She's also the company's chief executive officer, chief marketing officer, and chief creative officer, according to Vogue.

As Page Six detailed, Jenner has also been clear that she knows she had a jump on any possible competition due to her strong online presence. "Social media is an amazing platform," Jenner noted to Forbes. "I have such easy access to my fans and my customers."

But that doesn't mean that Jenner doesn't take some pride in her success, with InTouch Weekly quoting her telling Interview magazine that she hasn't taken money from the folks since she was 15.

This is a good point, as is the fact that she told Forbes she looks at what she's done as building a legacy for Stormi one day... if Stormi wants to run a cosmetics brand, that is. As her mother's daughter, Stormi might one day be just the executive type.