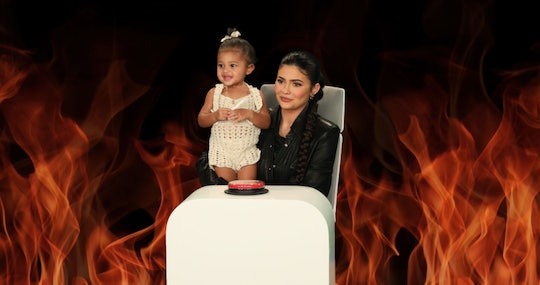 Stormi Webster is definitely at the stage where she is getting a little personality of her own. For the first year or so of a baby's life, they're sort of cute and sweet, mostly willing to go along with whatever their parents are doing with little or no input. Probably on account of not being able to talk yet. But after awhile they start becoming their own people and that's when the comedy gold really happens, which is especially hilarious if it's caught on camera. During a recent taping of The Ellen Show, Kylie Jenner asked Stormi who loved her most, and that kid didn't pull any punches.

The 22-year-old cosmetic mogul brought her 19-month-old daughter to a taping of Ellen's Burning Questions, a popular segment of Ellen DeGeneres' daytime talk show. Jenner and Stormi were together to answer some pretty interesting questions about their lives, most of which the Keeping Up With The Kardashians star answered since Stormi was busy being very adorable (I don't know how many times she looked at the camera and said "Cheese!" but it was never enough, I promise you).

In the segment, Jenner answered a question about what her boyfriend, and Stormi's father, rapper Travis Scott smells like. The answer she gave was revelatory, "He takes a shower, in the morning usually, and he smells like fresh shower, and fresh cologne." Apparently an intoxicating combination for Stormi in particular. 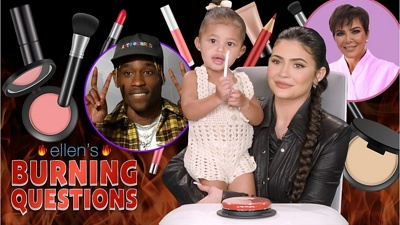 The Kylie Cosmetics owner went on to point out that Stormi is especially close to her dad, who loves to be super hands-on when he plays with his little girl. "When him and Stormi play together, it’s the most funny thing ever," Jenner said. "They scream and they yell and he makes her fly all over the house. They have so much fun together."

Later on in the video, Jenner asked Stormi her own burning question: "Who loves you the most?" I don't know about you but I suspect she was looking for a specific answer, but here is the answer she got immediately: "Daddy." Jenner arched an eyebrow at the camera and said, "every time." Because isn't that always the way with little ones? You're the one who brings them on a talk show and they're still all about daddy.

While it seems like Stormi is all about her dad, her mom insisted during an early September visit to The Ellen Show that the little girl is a good mix of both parents' personalities. "She’s such a good baby. She is the perfect mixture of both of us," she told DeGeneres. "She’s definitely, like, a little rager. She loves music. While [the audience was] dancing, she was [backstage] dancing."

Jenner doesn't seem seriously concerned about Stormi's love for her dad, of course; quite the contrary. Last summer she told Australian Vogue all about Scott's sweet relationship with his little girl. "We both experienced this for the first time, so I love learning together and just watching him with her," she told the magazine. "He's so good with her and she's really obsessed with him."

Stormi will probably switch back and forth between her preferred parents as she gets older. One day it will be her dad, the next her mom... it's all about balance. Especially now that she's becoming her own person.