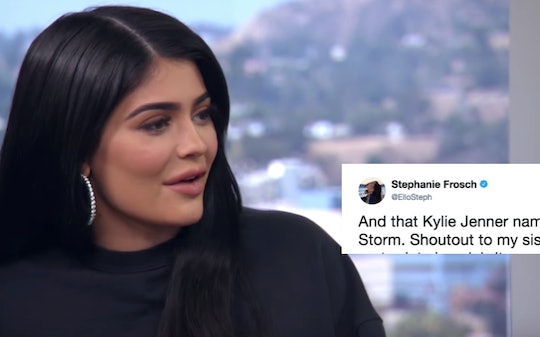 At this point, nothing is surprising about Kylie Jenner's rumored pregnancy. After not addressing the rumors for months and remaining out of the public eye, people finally started speculating on Friday that Jenner was in labor, based on some people claiming to know the inside scoop. At this point, Jenner would go into labor without telling fans or letting anyone else know that she was expecting her baby. After hearing she went into labor, people started talking about Kylie Jenner baby name rumors which range from conventional to a little out of the ordinary.

As previously stated, Twitter was the first place where people began speculating about Jenner going into labor on Thursday after friends of friends close to the Kardashian family spilled the beans. But these were only rumors and later that afternoon, TMZ reported that Jenner is due in March.

Regardless of that unfortunate news, fans took to Twitter to speculate what Jenner and her boyfriend, Travis Scott, named their baby. Their ideas were a little unconventional but hilarious all the same. If Jenner had fans speculating for so long about whether she was actually pregnant, the least they could do is guess a bit more about any potential baby names that she might have.

Storm seems like the most convincing name yet. The name is fresh, unconventional, and something that seems like something Jenner and Scott would like. Not to mention, the name is in the similar, unconventional genre of the names her siblings chose for their kids — like Dream, North, and Saint. Storm would fit right in with their cousins, if Scott and Jenner really did choose that name.

Storm is of English origin and, according to Baby Center, means "stormy weather." But Storm could easily refer to the media storm that Jenner and Scott created after TMZ first reported in September that they were expecting their first child together and neither of them said anything for months. Why wouldn't they want to name their baby over the chaos they created together? Just kidding. Storm is such a peaceful name, in spite of the image it may create. There is always a calm before and after the storm, and storms have such an intense presence the name could really set a kid up for greatness.

The name is rising in popularity, too. In 2016, 47 million babies in the United States were named Storm, according to Baby Center. If this is Jenner's baby name of choice, then there is no doubt that the popularity will rise even more into the new year.

No one ever said that the baby's name had to make sense, either. But if Jenner and Scott decided to name their baby "Scott Jenner" that would be a little wild. What this Twitter user fails to realize is that it is to be assumed that the baby would take Scott's last name since he is the father (or it would be a combined last name of Jenner-Scott). Naming their baby Scott Jenner-Scott only sounds a little far fetched to me. But the tweet is funny, especially since it points out that Travis Scott basically has two first names.

But it could be very possible that they give their baby a completely normal and ordinary first name like Chad, Emily, or Bob. That would be a true surprise.

This makeup mogul behind Kylie Cosmetics has released lip kits named for her sisters, mom, and grandma. So why wouldn't Jenner release a lip kit named after her baby? Not only would people buy it just to get their hands on the limited edition product but they would buy it because people really love anything Kylie Cosmetics produces. It's a smart business move, if you ask me. Of course, she probably would not name her baby "Lip Kit," but finally unveiling the name through a lip kit is something that Jenner would totally do.

Until Jenner flats out confirms that the baby is finally here, no one will know for sure the baby's name. But these are some pretty great guesses.

More Like This
Kylie Jenner Reveals That Her Mom Kris Basically Delivered Stormi
Kylie Jenner Is Unbothered By A Little Breast Milk Leaking On Her T-Shirt
The Office Halloween Episodes: A Definitive Ranking
Chrissy Teigen Says Her Pregnancy Cravings Are "Comical At This Point"