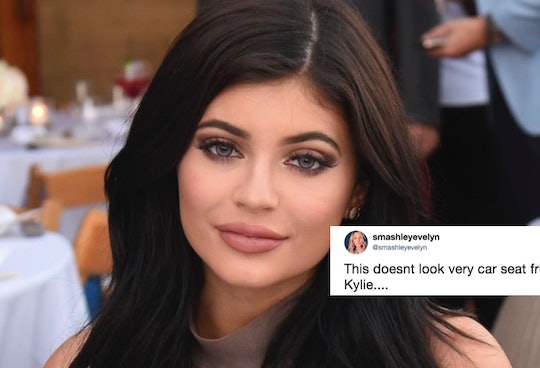 If there's one thing that Kylie Jenner loves as much as makeup, it's buying herself cars. Or receiving them as gifts, as she did last month when she got a brand new Ferrari as a push present reportedly from her boyfriend Travis Scott. But now, Kylie Jenner is getting mom-shamed for her new car and, really, it's so unnecessary.

You know, this is why fans didn't get to see Kylie go through her pregnancy and she had to miss being in her own family's Christmas card last year. She kept her pregnancy a secret so that she could enjoy the experience just for herself, without having to deal with peoples' mean and ridiculous comments about her life choices. All the internet trolls ruin it for the rest of us. She can't even show off her new car or anything having to do with her life now, lest someone assume that Kylie Jenner will ruin her own baby daughter, Stormi, simply because she goes out with friends, has long fingernails, takes a selfie, or whatever the next thing she does "wrong" will be. It's exhausting.

Having grown up in the spotlight, Kylie is obviously used to it. And she knows how to manage the media around her, although she has had fantasies of just powering down and disappearing from public life forever.

"Once I have a kid I'm not going to be on Instagram. You know, I'll probably delete my Instagram and just… I don't know, live life," Jenner told ELLE UK back in 2016. "...I would love to have a family and build a home with a farm in Malibu Canyon and just have my kids and throw away my phone, and just really, like, live my life and not do this anymore."

Luckily, she has not left Instagram and every time she posts something, she attracts a ton of love... and also a ton of hate. Right now, it's all about her new car.

Granted, the thing looks like the Batmobile. And I'm pretty sure it's a two-seater, so there is no space for a car seat in the back, which means that Stormi will probably never be in it, until she's old enough to sit up front and wear a seatbelt. Which, by the way, is an amazing thing to think about since Kylie and Stormi would likely look great cruising around in that thing together many years in the future. Also, Kylie has a fleet of cars, many of which are likely capable of securing a car seat in the back.

Still, people left comments like, "Great car for a baby." Another added, "just a practical vehicle to take Stormi to all of her appointments in." Another person added, "Yep that's a mom car...where the hell does a car seat go." Yet another quipped, "Super baby friendly 🙄."

Others were concerned about her priorities, like buying a Ferrari would somehow mean that little Stormi won't have everything she needs. "Why don't you sell it and donate the money to the homeless shelter. You hardly need this type of vehicle!!" one person wrote. "Priorities Kylie, good time to get them straight. You have a human that you need to raise! Not zoom around in an absolutely ridiculous vehicle!!!!"

One other person added, "Stop !!! Showing off. The world is falling apart and u showing offffff....." Another wrote, "I feel so sorry for your baby."

And one other one had a crying emoji next to the helpful reminder, "You have a baby." As if she would have forgotten.

Even if you can't stand Keeping Up With The Kardashians or Life of Kylie, there's no reason to sit and snark about every single little she does as a new mom, or in general. Every woman should be allowed to live her life and parent how she sees fit. Stormi was born into a huge, happy, really wealthy family. She's going to be fine.

Just because a woman wants to wear makeup, fake nails, take sexy selfies, or show off her hot new Ferrari doesn't make her a "bad" mom. Everyone's different. I feel like if a male celeb who just had a baby posted the same exact pic while picking up a new car, no one would be shaming him for being a bad dad or not caring about the safety of his daughter or questioning his parenting priorities. Let Kylie live her life and stop mom-shaming her for every little social media post. It's not a great look.