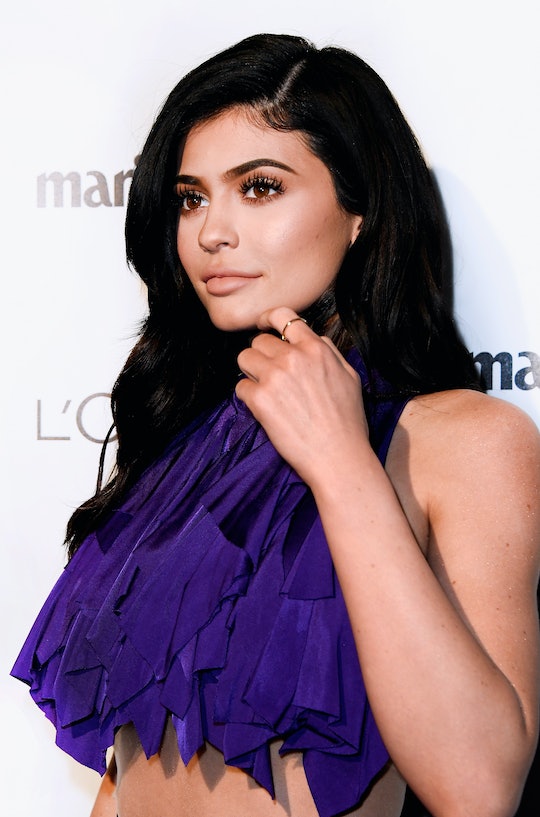 If you believe the rumors that the KarJenner girls do pregnancy as a group, you likely won't be surprised by recent reports that say Kylie Jenner had a "secret" baby shower on the same weekend as her sister Kim Kardashian. Numerous outlets are reporting that Kylie had been planning the event for quite some time when Kim announced that hers would be on the day before. No photos or official statements have been released of the alleged shower, but unconfirmed reports are enough to get the online baby fever going once again.

Two alleged unnamed sources close to the family told People that Kylie held her own shower at her home in Hidden Hills on Sunday along with the rest of her family. The theme was reportedly "pajama party," which would be a comfy arrangement for a mama-to-be with a growing belly (if she does indeed have one). Another unnamed source told E! News that Kylie's alleged brunch celebration "was a huge production with hundreds of pink roses that looked like a wedding," adding:

There were pink rose petals scattered around the pool and the posts to the tent were all wrapped in pink roses. There was also a big wall of pink flowers and a little stage ... Each guest signed in and left a note for Kylie. People gave toasts and talked about what a great mom she will be during brunch.

People also reported that Jenner banned her guests from posting photos of the shower online, which is to be expected if she is trying to keep her alleged pregnancy quiet.

Much more publicly shared, Kim's shower went for a Japanese cherry blossom theme, with everything in sight a shade of pink, according to CNN. Kim is expecting her third child with husband Kanye West, reportedly via surrogate, which is certainly cause for celebration. Khloé Kardashian posted photos of herself in pastel dress to Instagram, captioned "Cherry Blossoms and Tea for baby number three."

Along with Khloé's Instagram post, there were also a number of Snapchat photos taken at the shower. While there were no snaps from her own alleged baby shower, Kylie did use the app to record herself driving to Kim's celebration with some serious bling on. A large ring that appears to be a diamond on her ring finger on her left hand has sparked even more rumors about the business mogul and reality star. Fans quickly speculated that she was hinting at an engagement to her boyfriend, Travis Scott. This, too, is unconfirmed as of yet, but Kylie is doing very little to squash the rumors.

If Kylie really did have her own baby shower on Sunday, that would mean two Kardashian parties in one weekend. One unnamed source told People that Kim's shower was "a last-minute baby shower," adding that "Guests received an invitation earlier this week. It was a low-key celebration with family and close friends." There is no mention of how either sister felt about celebrating in sequence, should these reports be true.

Given the famously public life that the Kardashian-Jenner family leads, the lack of exposure that the "secret" baby shower has received is somewhat puzzling. It makes a lot more sense, though, when you consider the fact that Kylie has continually failed to confirm or deny the rumors. Another unnamed source allegedly told People last month that Jenner is looking for privacy right now, saying:

Even though this is a very exciting time for her, she wants to be more private for now and is doing her best to stay out of the public eye. She feels good, but her body is changing. She doesn’t want to be photographed. At the moment, she wants more privacy. She has family and friends come to her house instead so she has company. She’s very excited about the baby, though. She talks about the baby nonstop.

If any of that is true, Kylie isn't the only one who won't stop talking about her baby. Ever since the news of her rumored pregnancy broke, her fans have talked about little else. The supposed "secret" baby shower has given them one more thing to talk about until Kylie makes an announcement. And knowing the Kardashians, there could very well be a baby shower weekend TV special on the way. One could only hope.