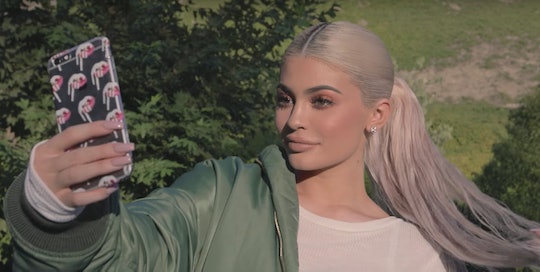 Kylie Jenner has flown under the radar recently, her normal social media presence has gone strangely quiet as she refuses to either confirm or deny her reported pregnancy. But have no fear, Kylie fans. Indeed, Kylie Jenner will reportedly return to social media soon and what's more, there's talk that she'll come back as a "mommy blogger" of sorts, as W Magazine reported on Monday. According to a new report from Entertainment Tonight, this is expected to happen after the birth of her rumored baby, should these initial pregnancy reports be true. And, as it turns out, fans shouldn't have to wait too long for her grand return.

According to ET, a source said that 20-year-old Jenner has been enjoying having some private time away from a constant camera crew in the later months of her reported pregnancy with boyfriend Travis Scott. But even though a quieter life is suiting her for now, she has no intention of becoming some normal, non-famous person who doesn't share the minutiae of her life with millions of fans. Please. Kylie is going to keep Kylie-ing, just in a slightly different way, and fans wouldn't have it any other way. As the source told ET:

This isn’t a permanent thing. As soon as the baby is born, she will make an announcement and introduce the baby to her fans. She will also address the fact that she went "dark" on social media and in the public... Yes, she will release a photo and yes, she will acknowledge the baby. She’s excited to continue to be her authentic self, and that will soon mean being a mother and sharing that with her fans.

Jenner won't be alone in sharing lots of content about parenthood, should these reports come to fruition. The mommy blogosphere has become a kind of modern-day California Gold Rush, with women across the country hopping online in droves, motivated by the idea that anyone can make a name for herself if she manages to hit that perfect combination of adorable children, great pictures, and relatable (or extremely aspirational) content, with plenty of brand sponsorships sprinkled throughout, of course. But obviously Jenner's mommy blogging experience would be a little bit different than the norm.

Celebrity mothers get in on the game all the time, but Jenner may be the most highly-anticipated of them all, thanks to the way she has managed to avoid confirming her pregnancy ever since magazines first started reporting the rumored Jenner-Scott baby back in September. (Romper's request for comment from Jenner's reps regarding the pregnancy rumors have not yet been returned).

Fans have been starved for bump pictures for months now and millions of people are eagerly waiting for her to stop posting pictures of her lipstick line and to start posting seflies and more personal shots again. If what the source told ET was indeed true, it seems like she's almost ready to give the people what they want.

General internet wisdom seems to be that Jenner is due soon, reportedly next month. Some conspiracy theorists thought that Jenner was the surrogate for her sister Kim Kardashian West and Kanye West, who welcomed their third baby via surrogate on Jan. 15. There are a lot of reasons why she couldn't have been, but come on... if Jenner was the surrogate for Kardashian, don't you think that family would have leveraged that story for all it was worth, instead of trying to keep it secret?

On Monday, a series of underwear ads for Calvin Klein featuring the whole crew of Kardashian Jenner sisters dropped, and many fans immediately noted that Jenner had very carefully concealed her stomach in the photos. In a shot featuring all five sisters lying on the ground, for example, Jenner holds a quilt over her in a not-so-casual way. The photos quickly exploded on social media, given that it's been a pretty long time since Jenner has done a new self-promotion (at least, it's been ages if you're going by Kardashian time.)

Soon enough, it seems, fans will get plenty of baby news from Jenner, if ET's source is correct. Who knows? Maybe at some point, after Jenner's millionth post about parenting, her followers will think back fondly to this time of mystery and Kylie quietude. Then again, it is Kylie Jenner we're talking about and a Kylie Jenner-inspired mommy blog honestly sounds like a goldmine that fans won't be able to get enough of.